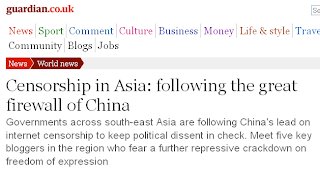 Vietnam, Burma, Thailand, Cambodia and the Philippines have all moved or are moving towards Chinese-style internet censorship, Ben Doherty of The Guardian of London writes. In his interview with me, I told journalist Ben Doherty that Rais Yatim's recent crackdown on bloggers was not representative of what the Najib Administration stands for as far as the Internet is concerned. I told him that Malaysia has one of the freest Press on the Internet and Najib Razak has continued to pledge greater room for freedom of expression to grow [check out his remarks at the end of Umno's general assembly today: Embrace the New Media ]. Rais Yatim's action - to lodge a police report against bloggers and made use of his MCMC to lean on Big Dog and I - runs totally counter to what Najib wants to achieve.

Unfortunately, Bin Yatim is not just a minister in Najib's Cabinet but he is THE minister in charge of the New Media!

Fortunately, Ben saw the point and had done his research: He does not see Malaysia as one of the countries in the region which have moved or are moving towards Chinese-style internet censorship. 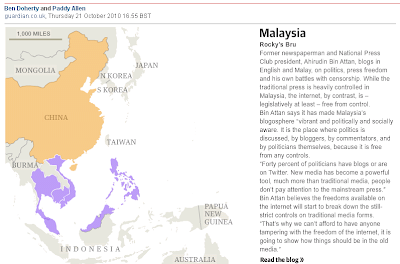 We may not remain so for long if the likes of Rais Yatim and his band of YES men at the MCMC and the Information, Communications and Culture Minister are allowed to continue damaging the status quo. The RM50,000 fine the MCMC slapped on TV3 for their Christmas-like Hari Raya ad is truly high-handed. Someone in the Ministry really, really hates Santa Claus!

Read The Guardian's special write-up on Silence of the Dissenters and Censorship in Asia: following the great firewall of China.

Ben Doherty made it into my latest weekly column in the Malay Mail - For the Freedom of Expression
at October 24, 2010