SMS from Matthias Chang, who is on board MV Rachel Corrie

10.00am- Israeli boats coming towards our ship. Stay calm;

Go with God, Shamsul, Matthias and all on board "Rachel Corrie". Thousands of people marched and demonstrated  in support of the six Malaysians on board of Gaza-bound vessel name Rachel Corrie and to condemn Israel's atrocities against the international aid flotilla earlier this week. In Kuala Lumpur, they gathered in front of the US Embassy on Jalan Tun Razak in one of the largest demonstrations the city has ever seen. 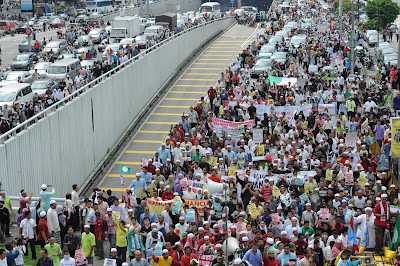 Non-governmental organisations (NGO) including Aman Malaysia and Umno Youth gathered in the compound of Masjid Negara after Friday and special (hajat) prayers for the safety of the activists.

Aman Malaysia adviser and Umno Youth chief Khairy Jamaluddin said the rally was to support Palestinians and condemn the inhuman act of the Israeli regime.

Chairman Datuk Ahmad Zaki Zahid said Malaysians had been angry with Israel for a long time for oppressing the Palestinians.

"Israel's act of violence and utter disregard for international law has inflamed anger among Malaysians," he said.

Khairy launched a "SMS For Gaza" campaign to collect funds for Gaza. Donors only have to send SMS by typing "GAZA" and send to 32928.

The anti-Israel rally attended by about 10,000 people then proceed to the United States embassy in Jalan Ampang and ended at 4pm after a memorandum was delivered.

In JOHOR BAHARU, over 100 NGO and Pakatan Rakyat party members held a rally in the compound of Masjid Sultan Abu Bakar after Friday prayers.

The anti-Israel rally in heavy rain lasted 30 minutes and ended with burning of the flags of Israel and United States.

In Penang, over 500 people participated in an rally organised by Penang Federation of Non-Governmental Organisations (NGO) at Masjid Kapitan Keling.

The 30-minute anti-Israel protest after Fridays prayers was filled with fiery speeches by NGO representatives.

In TAWAU, about 100 Muslims held a peaceful rally at Masjid Al-Kauthar after Friday prayers to protest Israeli violence.

Special prayers were also held for the safety of Palestinians and the humanitarian vessel heading for Gaza.

In IPOH, the family of Dr Selamat Aliman, one of 12 Malaysian activists on board "Mavi Marmara" raided by Israeli commandos, would be holding a feast to mark his return.

Dr Selamat, 54, a member of Jemaah Islah Malaysia (JIM) was expected to arrive at KL International Airport (KLIA) early Sunday with nine others, including two staff of Astro Awani.

His wife Faezah Hassan, 52, said no date had been set as it would depend on Dr Selamat's work schedule.