One Bangsar vs The People

Round 2. Six years ago, a group of Bangsar residents came out strongly to protest the development of a row of food and more food outlets right at their doorsteps. They lost the battle despite the support of their MP then. And One Bangsat was born. 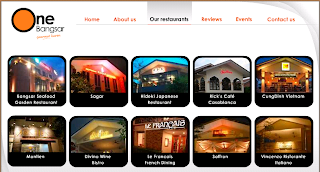 Recently, we learned that the residents hadn't lost for good. The One Bangsar deal, it turned out, was for a limited period of five years. And know what? The 5-year deadline ended last December. According to news reports quoting the FT Minister and the KL Mayor, One Bangsar and its 9 tenant operators must close shop and were required to convert the outlets into residential units, as per the agreement.

But One Bangsar and its powerful friends are not willing to go or let go. They say they will sue City Hall and the Government of the People.

I hope the FT Minister [Go Ahead, Sue Us! The Malay Mail, Monday 29/3] has the stamina to take them on.

Bro I think it is One Bangsar and not One Bangsat. Phew! I notice that Tommy Thomas is acting for Kalimullah's restaurant. Tommy Thomas is of course the Pakatan lawyer. Kalimullah also got jobs for Tommy thomas handling Khazanah and TNB work. Big bucks bro. The Kalimullah cancer is still there. When are we going to be rid of Kalimullah, Bodohwi, KJ and the leftovers?

Well then, the government can hire Cecil Abraham to fite Tommy in court.

I read alot of reports in NST that supported the One Bangsat deal. Did Kali mis use his position to influnce the editorial? NST pls come clean.
No 2 Bangsat

Aya u fellas dato locky also goes there so what the big deal.

I'm a full blooded Bangsarian. My family have lived in Bangsar for close to 40 years. Back then, that area was a green field, though undoubtedly filled with lalang.

Can we get rid of these new-age gastronomic lalangs and replace them with a park?

Well, when candies are given to children, please try not to snatch it back.

What???? this is the United Nations issue.....the settler One Bangsar is going to stay put, and is not going to nudge from the spot, not even 1 nanometer. The scenario look similar to the issue of Jewish settlers in the East Jerusalem. Well Bangsar folks you are now the Palestinians.. How does it feel....

I would have thought that would have been enough for the yuppies and expats that live in Bangsar or flock there on weekends.

I have yet to patronise any of the restaurants in One Bangsar, preferring to get my food fixes at Saravana Bhavan or any of the mamak joints around Lucky Gardens.

Bangsar is not the same place anymore. Gone are the days when, Rizal abdullah, Jefri Ramaiah , K.P.Waran,Nadeswaran,Andrew,Wiswalingam and all the other Malay Mail and NST journalist gather for Happy Hours in Canteena and adjourn to Moonraker or Dinty's.
Bangsar today is everything fake; you get fake whisky,brandy,beer too.Lucky garden is no more lucky. Let's move out to Rawang or Kundang if you want peace and fresh air.

I was a resident of Bangsar until I left for an overseas stint. Now that I am back in Malaysia I see that Bangsar has really transformed into something that I could never imagine.

On one hand it has become a chic area while on the other it has certainly caused a lot of misery to the residents! I truly symphatise with the residents. As for me, looks like I have to move out from Bangsar as the ambiance that I was used too is gone!

When is Lembaga Hasil Dalam Negeri (LHDN) or the much feared MACC are going to go after Kalimulah a/l Masheerul Hassan?
Did you know that Al Capone who killed more than a dozens people was finally got caught over income tax evasion? He spent many decades languishing in jail and finally died in it!

" They lost the battle despite the support of their MP then. And One Bangsat was born."

You purposely wrote that? "One Bangsat"?

And NST man is not playing God??? Oh pppleaseee! U pakatan idiots should stop these double standards NOW! And stop blaming everything on UMNO and BN!

1. one bangsar was born against the will of the residents. nstman could well be a stakeholder in the scheme of things.

2. bangsar residents association head george joseph protested vehemently five years ago but to no avail, why? mainstream media was told not to carry. media moguls own One Bangsar lah, they had parties, farewell dinners, all published in the media what...the same media moguls who preached freedom of expression and being liberal were also guilty of media blackout...

check the star, nst 5/6 years ago...all because the media moguls had business interests in One Bangsar...

the same media moguls who accused BN of accumulating wealth through dubious means were perhaps guilty of conflict of interests?

all the best to raja nong chik and fuad

Bangsar has been around for more than 60 years. I don't think Bangsar needs upmarket restaurants "to survive" - we can survive on Mahbub food alright!

IN the first place; WHY allow commerce to encroach into residential area? Tentula Residents' Association marah; they are already under pressure to cope with the overhead crow menace yang sampai now appear to be n unsolveable problem and a feature of life walking or parked under the trees in that area.

Then they see their neighbourhood taken over by clubs and pubs. Bangsar ni dulu ladang getah! Having done a FLIP, comes the FLOP :reverse the earlier decision without consideration to Returns on Investments (ROI)s for the businesses (regardless of whether we have a beef with the tycos or not)

Maladministration is the key..so the civil servants must pay for this decision with their jobs!!!

For Rocky these days, anything with a slightest hint of KJ, Badawi, or Kalimullah is bangsat .
So, anything you read here or malay mail should be read with that knowledge

One Malaysia can, One Bangsar cannot !
James

Sometimes we got to think of the people that are less fortunate like me.

We did in fact scout a wedding reception last year and confimed and paid bangsar seafood garden for the venue and our reception is to be held on NOVEMBER 2010.

Now this thing came out and it is really unfortunate for us as well because we might need to relocate and time is not on our side.

You made me shed a tear ! Remember Zamanphas? and Restoran Rocky (co-incidence???? with the laksa lady?