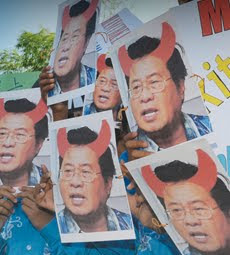 Poor Foundation. The war between the Yayasan Basmi Kemiskinan and the Selangor Menteri Besar intensifies with a police report lodged this morning against Khalid Ibrahim by the NGO.

On Wednesday, Khalid announced that he was declassifying documents pertaining to YBK to enable his state government to prepare a detailed report on the state government's contributions towards YBK. The MB did not say when the report will be completed. I'm sure we are very interested to know how much Khalid's government has given to the Foundation to justify it's wish to take over its running.

Meanwhile, YBK officials were in Melaka yesterday to visit a site the Melaka government is offering for their proposed UiTM campus. The campus was originally meant for Serdang in Selangor but Khalid stopped the project because YBK wouldn't make him chairman of the foundation.

The Malay Mail has the story here.

Khalid's government? Implying Toyo's Government had given a lot? Duit bapak dia ke duit rakyat? What is wrong as the head of State to ask for the all the previous spending (read Rakyat's money) to be accounted for? What is wrong with you!

this article falls short of saying WHY khalid wants to be the chairman ... it would help your readers to understand Khalid's intentions.

just to be clear ... NOT YOUR INTENTION or your imaginations but rather Khalid's intention.

These pakatan flers are truly interested in land takeovers.

Be careful, be very careful ...

Rocky,
Its not your money or Khalid's money.. its Rakyat's money and the MB was chosen by the Rakyat and he has all the right to be the Chairman.
Iman.

Well I guess you wont stop because you have sold your soul to the devil. (syaitan) and still may allah be with you.

At least pray 5 times a day, there maybe recourse.

I believe it's Serendah rather than Serdang.

Even with the existance of this Yayasan and Pusat Zakat/Baitulmal for many years, in Selangor, I still see orphans in my Kampung left neglected, berkeliaran like ANAK KAMBING...

No denying once in 5yrs, some lucky ones may get selected to receive the Hari Raya packets with RM20 or occasionally RM50 it.

Some tak malu Aduns/MPs will claim from their allowances to hand out rotten-expired-food stuffed into decorated tall hampers to these poor kids, baling kat kucing pun binatang tu tak lalu!

Udah tu udah ler, what you all are doing to these Poor orphans..

For those who refuse to understand why the muslims fight tooth and nail over the Allah name, and for those sleepy muslims (like Khalid Samad) who do not think that there are no ulterior motive of the Christians using the name, this one should lay to rest any doubts about it.

So Malay Mail is free...to fight Sun.
Are you dreaming?
Sun created the original idea and succeeded to be Straits Times..your big brother paper.
Straits Times...sooner or later...will also be free la.
You UMNO idiots know only how to copy good ideas....use money to bully competitors....no original ideas at all.
Everything touched by UMNO melayu...all money loss in millions every month.
Hi Rocky..money used are from tax payers la...not UMNO money grow on trees.
So...becareful with our money....you hear??
I guess you will not hear at all...hahahahahahaha
Why not give free advertisments??
Your paper will swell up...thicker than Star.......hahahahahaha

"I'm sure we are very interested to know how much Khalid's government has given to the Foundation to justify it's wish to take over its running."

Does it matter if Khalid's government gave not a drop and all that this Foundation has got has been from the previous State government or State linked corporations?

If Bill and Melinda are Trustees of their Foundation, I would not rank the so called Trustees of this foundation anywhere there. They may be Trustees but by no measure would they be settlors! From what little I have read it would seem that all assets of this Foundation are from settlements made by the State or State owned companies. Am I right? If I am wrong, I withdraw and apologise. But if the Trustees can show me one cent of their assets amongst the assets of the Foundation, I also then will shut up. But if the Trustees are in receipt of any kind of stipend, whether in the form of compensation, honorarium, fee, commission or, worse, salaries, then I'd say, sack the guys!!

Is YBK a foundation or a political party? It seemed to me that it behaved like a political party. This is what make this country sickening. Everything is turned into politics. When will this stop?

Joe Black,
Don't you see that this blog is becoming a joke..Even Patrick Teo's "Niamah" attracts more visitors. Look at all the comments and you know that people coming here are just for some fun..If you find Rocky's friends all deserted him....You know what kind of blog is this..

The Serendah land was given to YBM in th e'70's by the Selangor State Govt.

Now 30-over years later, what's wrong with the Rakyat asking YBM to account for the LAND (1,600 acres)and FUNDS given to them from Taxpayers' money?

MB Khalid has a bigger duty to the Rakyat than just the Trustes of YBM. In the past, in every project approved by any UMNO/BN State, they HAVE put in various conditions for construction approval - EPA studies, land setbacks, provision for suraus, mosques, playgrounds, club houses, schools, road reserve etc., etc., etc.

So, what's wrong Khlaid asking for transparency and accountability? Does anyone know how this alleged $ billion project will then translate to alleviating the poor in Selangor? Where are the details? Anyone ever seen it published anywhere? Dr.Raffick's blog gives some financial details and the directors of YBM have been paid substantial fees for many years. So, they owe the people some explanations, don't they?

So, let Khalid get in there and ensure all's ok before another PKFZ transpires and another bank is hit for a $ billion. Prevention is infinitely better than cure!!

And if the Trustees have done everything above board and are honest, what do they have to worry about?

dpp
We are all of 1 race, the Human Race

at least he don't go around screwing, sharing & blowing up mongolian girl...

So, it's no different huh? No wonder everyone's scrambling for top jobs.

Only difference here is, if it is PR doing it, it is halal. But for others, it is haram. That's the big difference.

That's the thing, exactly WHY khalid wants to be chaiman of the YBK is anyone's guess!

If you recall, it was The Malay Mail that broke the story on Khalid's "blackmail" ("make me chairman or YBK must stop work on Serendah project"). The story was based on minutes of a state exco meeting The Malay Mail obtained from its sources. The info was NOT volunteered by the MB or his office. The MB reacted to the The Malay Mail report by saying that he wanted to be chairman because he wanted transparency blah blah blah.

AFTER The Malay Mail exposed his demand to be chairman, NOT BEFORE.

You follow me? Ok, now DPP and - Rakyat Biasa - pay attention: If the MB wants to "ask for all the previous spending (read Rakyat's money) to be accounted for", what should he do? Shouldn't he expose the YBK? Demand for an investigation? Declassify documents pertaining to YBK immediately?

Yes. He should have. DPP writes: "
So, what's wrong Khlaid asking for transparency and accountability?"

But in this case, the MB asked for transparency and accountability AFTER the YBK declined to make him its chairman.

He declassified the documents AFTER The Malay Mail reported the "blackmail" by Khalid.

Try and sleep on that, bros, no need to rush a response.

If the YBK officials are guilty of mismanagement or corrupt practices, report them. Why did Khalid tell them to make him their BOSS and threaten them with STOP-WORK order if they refuse.

So EngHui, you tell me WHY.

locky an ahhui ya...now dont bother who is wrong and who is right la. if latuk sakom thing there is nothing wrong with ybk just show the account la... biar tutup mulut sikit si gagap tu...the rakyat only want to hear what is right maaa....

I will tell you why Rocky..

NOT ONCE you did break any news or offer any comments on your Leader - te Toyol about his lavish lifestyle or his many tax payers funded overseas for sight seeing and look-see. Disneyland.

You guys are all one-eyed donald ducks.

You want to know why? Simple. They are supposed to be Trustees. So Khalid must have thought. Thinking and acting like independent trustees. But then he probably realised they were nothing but puppets on a string. And no rewards for correct answer to who the puppet master might be.

Rocky may not be incorrect to pursue the point of view that Khalid may have acted high handedly.

On the other hand, the Trustees have acted like they are not accountable to anyone. That is a greater misdeed.

For example, if the Malay Mail provides an annual financial subsidy to its Sports Club to organise activities for its staff and do not provide accounts or budget, should the CEO remain quiet ?

What if the Sports Club management use the money for activities which may not be "proper" sports club activities?

And what if the Sports Club sues the CEO of Malay Mail for interfering or demanding to be President of the Club that the Malay Mail owners provides money for ?

You said "I'm sure we are very interested to know how much Khalid's government has given to the Foundation to justify it's wish to take over its running."

Thats how you interpret - wanting to become Chairman means wanting to take over its running?

Be more bijak sikt bro - it was only appointing one person as Chairman, not managing the whole show as Secretary, Treasurer, Committee Members etc.

How come you are still pretending like this, after being bestowed with honorific titles?

What is going on?

You still want to pretend like this and go after bigger titles like Tan Sri and Tun?

Oh, what a sale of maruah diri?

You are competing with the Mega Sales in the country!

I tell you why...Rocky.
You are a frog and full of shit.
But UMNO do not have people of your class...so clever to promote and balls carrying them.
That's why you also got datukship.
Chowceebai PERWIRA talking kok.