Updated 5pm:-
4/1 Home Ministry files appeal at Court of Appeal against the High Court decision that allows Catholic weekly, Herald, to use the word 'Allah'/STAR 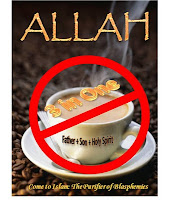 A campaign, in the name of Allah. Inevitably, a group of bloggers has stared a campaign, Bloggers against Blasphemies, in response to the High Court ruling allowing the use of "Allah". Blogger SatD, who is initiating the BaB campaign, worries that the judgment would test the collective consciousness of the Malay-Muslim majority of the Malaysian population. "At what price", he asks.

Read SatD's call to back this campaign, h e r e. He attaches his posting with the blistering "... a 500-yr old itch?" arguments by Apo, who's hoping that his piece will help the PM's Dept and the Home Ministry in their appeal against the High Court decision. 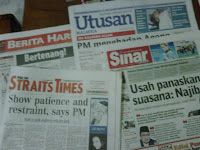 pic, today's headlines of the PM calling for calm.

Also, read Anas Zubedy's "Allah, the Bible, Christians and Muslims" here to understand why even the more open-minded Muslims can be offended by the High Court judgement:

'Failing to do so will create mistrust because the correct term for God in Malay is Tuhan.The Muslims will question your consistency and sincerity.

Because the real issue here is Trust. Not the technicality of the term Allah, Tuhan, Elohim, Elah etc.'