With updates at the end of this article:-

Nik Aziz and Nudin Awang share more than just initials. It seems that 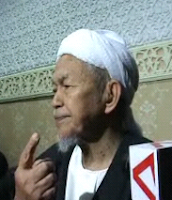 Nudin was the guy who offered to pay the PAS' spiritual leader's VIP package to Mecca. Nik Aziz said there was no conflict of interest. But my sources said Nudin Awang (aka Nordin Mardi because he was a driver with Mardi before he got his riches) has benefited from the Kelantan state government that Nik Aziz's PAS administers. He's more than just a billboard operator.

Despite its timber concessions GEM, somehow, managed to stay an unprofitable venture. There are whispers about hiving off profits to SEAL Inc, but it's something that needs to be proven. But profitable or not, it hasn't stopped the Kelantan government from awarding generous concessions to GEM.

According to my sources, it is Nudin's task as director to ensure that the concessions keep coming from the Kelantan PAS government to GEM. And he's been doing quite a good job. In 2005 alone the unprofitable venture was given a timber concession area of some 4048 ha (about 10,000 acres) by the state government. The Kelantan SEDC signed the timber concessions on 14/3/2004, according to records. The concession is said to be worth easily in excess of RM20 million, which should make GEM a profitable company but it's somehow not.

During this time, Nik Aziz or Tok Guru was Chairman of the Kelantan SEDC and KPK. Which is why, I reckon, the Malaysian Anti-Corruption Agency is investigating the PAS leader, and also why NA had to cancel his plan [here]to accept NA's offer to sponsor his trip to Mecca on that VIP package.

p.s. Now, a lot has been written about Nik Aziz and the RM65,000 f.o.c VIP haj package, but Syed Akbar Ali's Pakatan Riot Again does well to put everything in perspective.

Updates: And amidst the brouhaha over Nik Aziz's sponsored trip to Mecca, on-leave Zaid Ibrahim has proposed that the Tok Guru be made the ultimate leader of Pakatan Rakyat ....

By Clara Chooi of The Malaysian Insider

The PKR de facto leader took pains to stress in a press conference yesterday that if and when the PR gets registered as a formal coalition, the pro tem committee which Zaid chairs, would have to be surrendered to the leadership council.

Only then would the due process of determining the coalition’s leaders ensue, he added.