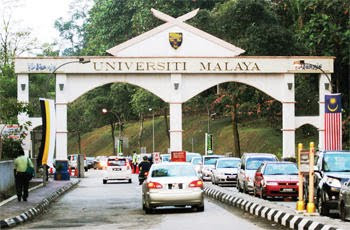 update:
"I believe the project has been shot down by non other then our visionary and proactive Prime Minister Najib Tun Razak!" - Pasquale of Barking Magpie
I must thank Observer for pointing out yet another link, Hellelujah! The gate community project at Universiti Malaya cancelled!

"For future generations". The Malay Mail's front page yesterday, UM Condo Plan Scrapped, is one of the best news to have come out since April.

I'm not sure if this means that other ill-conceived projects under Pak Lah's tenure as Prime Minister are also being reviewed, but the UM project is certainly one of those that deserve to be shot down. Annuar Zaini, credited by some as the mastermind behind this project, may not agree with me on this, though.

That is really good news.

I am waiting the Iskandar Malaysia development to be resolved and clsoe up IRDA. Return it back to State of Johor!

You have just made some people very unhappy $,brother

On this one, I'm with you. My understanding is that Annuar Zaini had a deal with Glomac to develop a small part of the campus into private housing, but once you start with 27 acres, it is just a matter of time before the whole campus gets devoured by the wolves.

Don't spin too much la, bro.

You and I and the whole of Malaya know pretty well that Tun Tan Sri Datuk Seri Panglima Wira anuar zaini is siapa punya kuda tunganggan.

Oi Rocky Pasqual also wrote about UM why you no likn him in Rockybru!
You dont like him?

We jubilate as though the institution is one hell of an outfit that is really worth saving.

The U today is a pale shadow of what it used to be. In fact even in the sixties one writer who lectured there described it thus: "Behind the university's brash modern facade there is an almost total lack of intellectual and cultural life."

At least in the seventies there was some attempt at intellectual and cultural vibrancy mainly due to students dynamism and creativity and sense of adventure. The U's population, and even outsiders, were regaled by performances by the Martha Graham dance troupe, The Bolshoi Ballet, Takarazuka from Japan, and even Marcel Marceau the famous mime.

The Vienna Boys Choir performed as well as Ravi Shankar, cheek to jowl with the likes of Albert "we learnt about her body, but her mind we didn't know" Hammond, D.J. Dave, Lobo, José Feliciano, Rafaeh Buang, the Bee Gees.

Plays were staged at The Experimental Theatre – Usman Awang's Uda dan Dara as was Arthur Miller's The Crucible, and Antigone and Dayang Sari.

Today, one wants to leave the place almost as soon as you step unto the grounds. No sense of wanting to walkabout and absorb the intellectual, physical and cultural aura that decent such-like institutions would give.

On one recent trip to the hostels, I was shocked to see the place looking like a construction worker's kongsi. Where two shared a room now it looked like there were five sharing the scraps.

No sane or honest person would condone the attempts by the tokoh korporat pirates and slime balls to bite off chunks of the campus for their narrow greedy interests. These creeps should flaunt their corporate-world skills and savvy where it really counts. Not where they can succeed because they have someone in Putrajaya.

But lets face it. The university has seen better days. There is little future generations could derive from it that could match the joy of being on campus during the U's salad days.

This developments have not even started as yet and even if it does, no rakyat's intrest are at stakes.

Anyway, what about perwaja, klcc and the many others that became a mere 'white elephant' in the context of the Malays economic achievement but till now nobody knows who had the most benefit of these mega projects!

This is not the only one of Badawi's, or is it more right to say Khairy's brainwave to be flushed down the toilet.

Khairy tried to hijack the Halal Certification in Malaysia. They formed the Halal Development Corporation of course, supposedly under the ownership of the Finance Ministry. Adn then what they do? They pass on the job of setting it up and the entire feasibility, consultation, implementation job to Ethos, their friendly Con sting company. Like as if these jokers know anything at all about Halal! What was the plan anyway? To take over from Jakim, which they did, and then at a later date and everyone gets used to it, privatise from the Ministry of Finance side is it?Or was it that the MOF then hires Ethos or anyof Khairy's friends to do the job so that in the first instance the MOF owns the HDC, but the money flows down to Ethos, maybe? Anyone bothered to find out how much was paid to Ethos over this job that failed?

Then why suddenly, HDC is forced to hand the certification back to Jakim? Has it got anything to do with Indonesia stopping the recognisition of HDC issued Halal Certificates until about April this year? Has it got to do with Indonesia not recognising allof the Halal Cetificates from then on as they, in their estimation, do not think the Malasyians have the necessary qualifications or experience or expertise to certfy certain industries?

Or maybe the States in Malaysia decided that letting HDC take over certification is a joke and since Islam comes under the States, they started becoming difficult? First the States hand over cetification to Jakim, a Federal religious organisation. Then Jakim hand over to MOF. MOF hires Ethos to do the work and then Etos wallups the oney. Great la!!

Why no one talks about this whole fiasco that has cost taxpayers, or is it more right to say, Muslims as I suppose Jakim's fuds are to be used for the benefit of Muslims. Via Islam Hadhari, all this was done. And now after so much is lost we go through a full circle with Jakim now doing their old job once again as it should be. I can't imagine Jakim needing the services of Ethos!!

Very welcome news indeed. MU (dulu MU, sekarang UM) should award Pak Lah an honorary degree for approving this plan. Also, since we're on the topic of universities, and I don't mean to be personal, I'd love to be able to read Zahid Hamidi's PhD thesis.

I'm with A Voice on IRDA.

Observer wrote:
"Oi Rocky Pasqual also wrote about UM why you no likn him in Rockybru!
You dont like him?

Hey, thanks man. I better to the link now. You do like the guy, uh?

It's a pity, if the deal had gone through, it would probably be the 1st of such deal in the world!

Revamp the whole board of UM for supporting such ill-conceived ideas in the first place.

The 'underground' mastermind of Pak Lah's SIL's cronies in UM (who is more dangerous in the long-term) is "Wirakarnain Bin Sani". His modus operandi is by becoming the "UMNO Godfather" in campus. No matter who becomes VC or Chairman, they have to listen to him because of his UMNO connections. The truth is, he is a disturbingly corrupted soul who has squandered millions from the university coffers (including from students fees), and he crushes those who try to expose his activities by abusing his "powers" in UMNO.

FYI - In the past, BPR has investigated Wirakarnain Sani many times but they had to consider him untouchable because of the SIL's protection!

I knew it. When they first leaked information on it, one thing that came to mind is that a politician could easily jump in and intervene, winning crucial support from those associated with the university.

It's hard to believe the project was canceled in the best interest of an educational institution.