Save Azilah and Sirul blog campaign

Where's the beef? Blogger A Voice has challenged de facto Pakatan leader Anwar Ibrahim and fellow bloggers RPK and Susan Loone to come up with the proof they said they have in order to save the two cops the Malaysian courts have found guilty for the murder of so-called "Far Eastern Mata Hari", Altantuya Shaaribu. 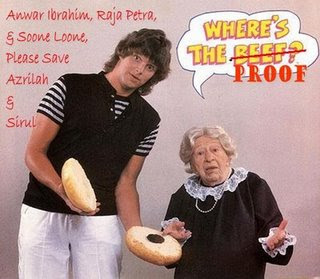 RM/USD 1 million photograph. Now, we all have heard talk about a photo of the PM, Altantuya and Razak Baginda having dinner (other versions talked about a photo of Najib-Altantuya-Rosmah and even Razak-Altantuya-Kalimullah!). A lady blogger, during a meeting she helped arrange for Altantuya's father with several Malaysians including RPK, was telling someone close to RPK that it would cost a million bucks to get hold of the picture. It wasn't meant literally, I'm sure. Can't recall if she figuratively meant US$1 million or RM1 million, though.

Btw, here's more food for thought for all bloggers out there.

The court also granted an order to restrain Raja Petra or his agents from allowing any article or journal or letter or comment which is defamatory against Shafee to be posted on the "Malaysia Today" weblog.

According to a document made available to the media, Shafee had obtained a wide range of orders including to compel Raja Petra to reveal his source from whom he had obtained information that he had stated in the three articles posted on Aug 6, 7 and 11.

When contacted, Shafee said the court had also ordered Raja Petra to reveal the identities of all the commenters and visitors who had posted their comments and messages following the posting of the three articles.

He alleged that Raja Petra had been making up stories and running a political propaganda to mislead the public over political issues.

Shafee said that besides filing a defamation suit at the High Court Registry here against the blogger, he also planned similar actions against all commenters on the articles once he had received their details.

The court has fixed Sept 2 for inter partes hearing of Shafee's application.