NST's mistake. When JMD told me about an AFP news article that new Proton chairman is selling off the national car's majority stake to a foreign interest, I told him I was shocked. I immediately called several contacts to verify the report and was told by Proton that NST had published a correction this morning:- 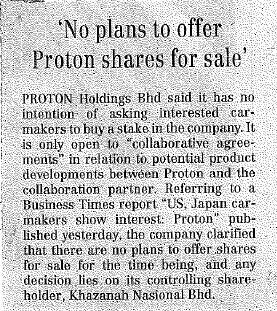 Click here for the AP article that JMD had read on-line.

ah-haa... time for those managing NST editorial to go...

Proton should be working with Toyota as partners.

Then the opposition states will not have a bone to pick.

It seems that Toyota makes better cars than Proton, for the ever busy MPs' to run around in a jiffy. Proton Perdana is 'too slow' to do the job.

To solve the problem of the MPs', who initially rode bicycles to Parliament as a cost cutting measure, Proton should talk to Toyota immediately.

Hopefully someone went in with their voice recorders on..

With the current management team, Proton is a liability. I can tell you this guys are not passionate about Proton.

Why Volkswagen and GM would want to collaborate with you ?

Proton should consider to sell half of their stake and join venture if other car manufacturer especially from Japan (toyota, honda, etc).

Since that the automotive industry is really in slump e.g GM. ford, chrysler. They must act now so that they can sustain longetivity and at the same time the bigger partner can help in transferring tech n reduce cost.

To Proton is time to think for merging n serious we can learn much from Japan. The spare part company also can boomish instead they produce proton parts they also can produce other car partner parts. Slowly we can learn a good mgmgt from japan, which they are very advance in SMEs and the main backbone of their national economy.

Will Malaysians protest their coming, or is that just reserved for Israel?

Something fishy is going on. I hope NST make a blunder. I hope not like LABU case again where after the stake is sold then they announce it.

Selling or not, but who's buying?

they should sell proton and get rid of the dead wood in the company that's brought it down to such a sorry state.
the md of the company is doing a darn good job but i can't say the same for the people working under him. ada banyak yang bagus tapi ada banyak juga yang merosakkan atau dalam erti kata lain tak boleh pakai.
the national car project in its essence was a brilliant idea and to a great extent has fulfilled very noble goals. it is a success in my book.
it's staying focussed and committed that's the problem.
the saga has done well to lift the company back into profitability, so too has the persona, and now there's an mpv due out soon.
great, but please please make much more interesting cars and dont just be happy with the basic "sure to sell" vehicles.
as for the mpv, i'm rather disappointed that it's not a full sized one but rather one of those stream, wish and livina wannabe. they should have built a naza ria wannabe - at least i would get the full sized version with lots of luggage space. buatlah yang besar sikit brudder oi. what for you get a distributorship for thule roof rack and boxes for asia pacific - are you pointing to the fact that space will be limited in the new mpv kah??? tahu tak pa.

well going back to if and ever proton is sold to a foreign co, it should not be an embarrassment to any party. why should it be. proton has succeeded well and beyond expectations - i'm not talking about the product but the industry it has helped to create.

just my RM1 worth.
cabutz!

Haha... good luck to whoever buys Proton, unless you're gonna do an extreme makeover to the company.

Should have taken the Volkswagen deal back then.

Rocky, it interests me that everytime NST fumbles, you're right there to point it out.

About time proton have to get a partner ..Japanese car manufacturer still the best option otherwise strengthen the R & D but that will take a very long time..the management must have proton and the country agenda NOT personal agenda and position..

proton was a blunder from the start in 1984. many auto companies were victimised to make way for the ensured success of proton. the victims were Champion Motors , Orchard Motors ,Borneo Motors etc. They were selling models like Volswagon,Audi,Opel,Austin , Fiat etc. It was Mahathir's look east policy to love Japan.

So the european models had to wind up to ensure the survival of Proton.
Do you think they want any form of joint venture with Proton ?
so why cry for proton now? It made a few malays super rich like Tan Sri Yahya. He said Lotus technology or F 1 would propel Proton to great height. my foot !

Any company that chooses to play race preferences can never employ right people.
When have we ever hear an UMNO controlled company is successful......besides Petronas....hat is another story....as Shell...Caltex... and others need to make sure the oil is best too. So not hard to be the best.
Cars industry is a rat race. Proton cannot keep up the pace against giants....in designing and technology...with limited sales.
They need to be practical..and allow others to come and hold majority shares.
Does Proton think..they can dictate terms to VolksWagen? The deal failed......and Proton will continue to fail....with typical political arrogance attitudes...producing some real stupid cars..and with seriously unsafe features or lack of knowhow.
Perdua is so successful ...why?
Because they leave the major and design to their Japanese partner....and now so huge and successful.
When there is too much UMNO interferences and control...Proton is bound to fail.
Selling or not selling is political motivated and not sensibly decided.

Call off the LCCT project (KLIA@EAST) immediately or we will vote for PAS in the Jan 17 Kuala Terengganu by-election. This is not a threat, it's a promise!

proton should look at the kereta lembu. might learn much more!

"Malaysia, the land of a thousand malls but not a decent drop of water to drink."

Proton has no relevance to me-I have never and will never buy a Proton ever....frankly, the public does not care one bit whether Proton is sold or managed by whoever-all we want is good affordable cars...

By the way, in case anyone doubt Toyota Camry is a good choice for the PR states, one only needs to visit Dubai. From my conversations with many taxi drivers there, apparently Dubai taxi company has evaluated different makes of cars for their taxis over the years, and Toyota was the undisputable choice for them.

rocky, funny that pak lah appoint dato nadzmi as chairman. Rocky, you better dig-deeper on his management on bus business and his arguement with ex-partner ibrahim ali!!!! Funny and it looks like proton is doom under his chairmanship

stupid khir, he should stop the matter if he really sincere in managing the state!!! stupid khir

wah.bad boy ahh NST.not doing enough homework then released such news which caused only panic that time.good thing that Proton came forward and clarify the issue.