Big Dog. After the lawsuit by NSTP in Jan 07, I started encouraging bloggers who were close enough to me to shed their anonymity and put their names & faces to their blogs. Quite a few unmasked themselves. It was especially important to me then because I felt we needed to tell the authorities then that we were not doing anything unlawful and, therefore, we had nothing to be afraid of. 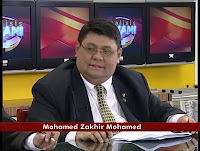 Of course, many bloggers could not reveal their real identities for various reasons. For eg, because they work woth the MoF or the PM's Department, or they are journalists with the NSTP group, or simply because their bosses won't allow them to blog.

I'm glad to know that the blogger Big Dog, whom I've described as "rabid" or "right-wing" pro-Umno , has decided to reveal his real identify, here.

I have no time for him,

I wonder what makes him support UMNO? Can you tell from his blog?

Or is he simply a racist making hay while the racists rule? Looks like it. Maybe I'm too cynical. But I have a right to be. I have watched Malaysia go to the dogs under the watch of his party.

This just reinforces my belief Malays should not be looking to UMNO for leadership into the future.

So quite with the draw huh mutt!

Resistance to defend vernacular school with all thsoe stunt and excuse shows Chinese do not want to mix with the Malays and remain insular within their community, and practise their foreign originated culture and language as though this is fucking China!

ANd they go blah blah about unity and fucking Bangsa Malayisa not knowing what the fauck theya re talking about.

The bloody Indian sent their kids to Tamil school so they will remian as gangsters, estate workers and labourers for their PPP, PKR and MIC warlord to exploit.

Wake up Tamil has no commercial value in Malaysia nor in India la!

The real racist are the pendatang who remain adamant not to integrate and yet claim they are fucking Malaysian!

We are not talking fucking assimilate, just integrate!

Now these bloody pendatang are accusing the Malays, (while avoiding the other Pribumi for the mean time) as pendatang!

Many UMNO supporters will give Najib a big welcome once Pak Lah took a hike. PRU 12 was UMNO vote against Pak Lah...don't be mistakenly silly!

proceed with your effort although all those DAP, PKR supporters call u recist, actually they the most recist. Bigdog u hv strong support from malays (UMNO and non-UMNO).

Heh heh heh ! There we have True Racist Malaysian reinforcing what I just said. I am not just quick, but accurate too....

So much for Ketuanan Melayu !

You think pendatang or non-pendatang that makes a difference to Malaysia? Only in your small racist minds la.

You tell me, in any big financial scandal in Malaysia that UMNO doesn't have a finger?

Corrupt, stupid and racist are the three characteristics any UMNO member must have in order to progess up the ladder - you don't believe me ah? Just go to your local UMNO branch and see for yourself..... This is called Ketuanan Melayu? Ketuanan UMNO more like it, and this pile of dung is being shown the front door! UMNO no longer has any leaders worthy or fespect, although this can be ascribed to the major parties in BN. Najib Mongolia? Puhleeezee !!!

Or in that small mind of yours that is progress or worthy of praise and respect? You think UMNO are the Sultans of old who were above the law?

Vernacular schools are there despite the lack of government support - the community contributed to give it life and so be it. So the Chinese/Indian community have to close their schools that they built and nurture with their effort and resources and for what?

Why the issue now? Coming from an UMNO racist like Mukhriz near a corrupt UMNO AGM, you think people are as stupid as UMNO members to believe it was a sincere gesture at "perpaduan kaum"?

C'mon la this is not a perwakilan crowd to cheer and clap UMNO statements !

watched the show - the host need to do his homework and inject some enthusiasm, kesian zakhir!

I've a feeling those supporters of Pakatan are against democracy as they will scold, bully and browbeat those who will not flip over to Pakatan.

Just look at the comments in most blogs and Malaysia-Today.

oh my god, i think i know him. he is close to Mahazalim family!!! Am i right?

So be it. Let him excercise his rights. Because there will always be two sides to a coin.

If the preachers of democracy are to be believed, then they should allow this dog to growl as much as he likes.

Just because he has a differing viewpoint, that does not mean ISA for him.

Let it be, in this dog eat dog meat world.