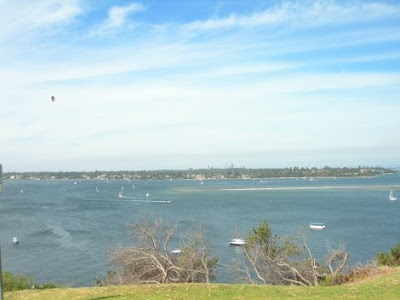 A blogger on holiday in Perth posted this picture of Mosman Bay earlier today. It's summer there, he writes. He also posted pictures of three homes on Mosman Park in the exclusive Bay area. They are houses no 44, 66 and 66A.

After March 2009, some people are making Perth their homes.

The Malaysian rakyat had been the real suckers for the past 35 years. Did Mahathir too not once said he may also consider migrating? They lead the most comfortable and luxurious lives. And we had voted for them. So ask yourself who's the real dumbhead? Your leaders or YOU? Go enjoy those retirement homes in Perth. Or run the risk of being detained under the ISA when Menteri Botak is no longer holding that Ministry.
malsia1206

don't understandlah, pls don't post things that confuse people. Whose houses are these?

I almost puked when I read Hishamuddin Aun's column in the Berita Harian today. He is now ass-licking Najib. A few months ago, this was the same guy who was going around telling people that Rosmah Mansor was the real Deputy Prime Minister, not Najib. A few weeks ago when one of his editors asked him who was going to be made Group Editor-in-Chief of NSTP, this is what Hishammuddin Aun said:
"Rosmah will be making that decision".

Come on lah brother Hisham time to let go and leave lah. They won't charge you with corruption, although there is a lot of proff against you taking money from Khir Toyo, Shahrizat, Azeez Putera and so on...

Just take a plane to Australia..and you are bound to fins ONLY Muslims..occupy the first class seats..and all from UMNO.
This has been going on for more than 30 years!!
So much properties ion Perth and Sydney owned by Malaysians..almost 100% ..all by Malays.
Will be nice.if all swear by the Koran..it's hard earned money and be done with it.
Or..if anyone accused anyone and swearing by the Koran...it become truths..and does Najib dare to sack that minister and let them..fight out in court?
He said 900 complaint received on corruptions...easy to complaint..hard to undertake.
I guess...Mongolian murder case is one classic example...easy to accused..but by him searing by the Koran..that's it..he is all truthful.

Wasn't you the one who called Rosmah the ugliest b@*&h in the whole world?

Not so big la these houses. Average size. Comfy though. Maybe a couple of millions at most. Zakaria's palace looks to have cost more. Estimates are between Rm5-7 m for that.

I know that Mahathir's son had a RM7 million house in Canada that was broken into some years back. A Porsche Cayenne was also stolen. He subsequently sold the house. They have a few houses in choice addresses all round the world as well. Anwar has it that Tun has a ranch in Argentina. Anyone surprised?

Same shit, different PM. I have never voted for their party by the way. Some consolation that will be in the economic hardship expected in the next few years.

I don't think Pak Lah and Mahathir have any worries about their families' future. They have millions parked outside the country already. All legal of course. ;)

Just make sure they control the police, the media, the AG's office and the judiciary. Any scandal will become old news no matter how big.

Do these houses belong to Kalimullah Hassan, Patrick Lim and Kamaluddin Abdullah? Say it man if they are!

Anak mahadey pun sama lah. For once call a spade a spade. All of them got luxury houses around the world. Nak muntah lah baca one sided postings nih.

You are the real dumbhead. Who asked you to vote for them?

Houses of the political rich
Sucking out the wealth of the country
Invested in hot properties overseas
When asked how they got the money?
They just smile and walked away

OK time to own up!
The one on the right is mine, the one on the left is yours and the middle one is ours. If you take the left one and take the y out of it it becomes ours. The right one is not necessarily the wrong one. In this case, right is wrong.

Anonymous said...
This comment has been removed by a blog administrator.
1:43 am

These are the corruption stories that will never make it to any media. That's why even EU politicians are afraid of bloggers ... Wali Kota

Don't get me wrong..other Malaysians....especially Chinese own alot of properties in Australia...but we are talking about hard earned money by them.and buying basic houses.
All the high ends...ones...and Mosman Bay...is like Beverly Hills..in L.Angeles...all expensive properties.....all owned by UMNO high ranking people.

Mahathir was a really clever & deceitful Operator who pitted the malays against the non malays and his 'ketuanan melayu' mantra made him fabulously rich with homes in Argentina,Canada,an island called Marina in Langkawi,a bakery and tons of cash stashed away.Mahathir's legacy is a country practising Apartheid malaysian style & a tainted judiciary which he used to frame & fix Anwar Ibrahim when Anwar refused to bail mahathir's son shipping Company. 'Sucker Malaysian for 35 years'

I suppose if all of us have the same benefits like our leaders, we too can afford to buy such pretty and exclusive houses eh. Hahaha..

Well, on top of a big chunk in salary, there is free house to stay while you are in office, free transport not just for yourself but also the whole circus family, children's education, household, shopping, rest&relax bills are all paid for.. so, there is really no need to touch the salary eh... So, it is not surprising these leaders can afford such lurvely houses.

What's the fuss? The houses were bought legally, wern't they?

We have Malaysia Your Second Home programme and many Aussies have homes here too.

Is it wrong to buy property in Australia?

I still don't get it.

Monsterball, you hit the nail on the head. Bravo. By the way, there have been complaints about your atrocious english. No problem, I can give you some lessons.

While we can bitch about the cost and luxury, being a human being with needs, it’s all right to own and invest in properties elsewhere, like everyone else.

They work for a reason, not just to die for the party or like that. There’s an end to all Perjuangan.

As long as they declare their assets and have their source of income/funds explained, It should be acceptable.

What about DSAI, has he ever declared his assets publicly?. What his source of income for the last few years before him becoming MP.

Anyone can speculate, so go on speculating.

lol, maybe it is just some random pictures of some houses in aus. and u guys are theorizing a lot of stuff already..

Good work, Bro! It's just the place for a bunch of soprofic sloths and their lackeys especially a lion riding "sheila" to snooze in.

As for those after Tun M, bear in mind that at least the man did many good things and kept the ship on an even keel even during the roughest of times and that goes for those ingrates who now brag about Bangsa Malaysia. Wonder in which shithole they were crawling about in during them good times?

Salute to Malay Diaspora. Watch out Australia. In the not too distant future, the Governer General or maybe The Prime Minister of Australia would come from Malay Blood. If the Obama train will keep rolling on.

nstman.....As long as you and readers can understand my messages...who care about Queen's English.
Afterall...so many Tuns and Tan Sris...real crooks...filthy rich....cannot even speak better English than me.
As usual..my character and english will be the talking point...for some pro UMNO and BN guys.
One idiot simply don't get the real message..and ask...what's wrong...UMNO crooks buy most expensive properties in Australia.
How to talk logic to such dumbo?

MAYBE ROCKY CAN SHOW US PROOF THAT HE IS NOT ON DR MAHATHIRS PAYROLL BY SHOWING US MOKZANI'S NICE BIG EXCLUSIVE HOUSE IN LONDON, AND WHILE YOU'RE AT IT SHOW US MOKZANI'S HOUSE IN CANADA AND AUSTRALIA AS WELL, OH OH OH AND DON'T FORGET THE HUGH HOUSES THAT BELONG TO MIRZAN IN CANADA TOO

Who took pictures of my houses huh?

AND DON'T FORGET TO SHOW US PICTURES OF THE MAHATHIR KIDS HOUSES IN KENNY HILLS, THEY HAVE A GATED COMPOUND ALL TO THEMSELVES, AND ITS FUCKING HUGH !!!

You were all fooled.
According to the neighbours, particularly Mrs. Houghton who moved into house number 96 from Tasmania five years ago with her line-in boyfriend, number 44 is supposed to go to a well-known Malaysian politician by the name of Anwar. Number 66 to a guy, supposedly also Malaysian, who goes by the name Badawi and the 66A actually belongs to Mr. and Mrs. Mokoena from Durban, South Africa. I found out that they made their wealth by selling Tiger Balm in countries like Zimbabwe, Namibia, Zambia and even as far as Cape Verde.
House number 69, is said to be owned by a wealthy Malaysian politician by the name of Sam, who comes from Ipoh and is said to have made his wealth by exporting second-hand or recycled lamp posts and railway linings to countries like India, Bangladesh, Pakistan Sri Lanka, Maldives and even as far North as Turkmenistan and Kyrgyzstan.

Seriously, I didn't make up this story. Please everybody believe me.

When you accused other people of corrupted, misused of power, rich and so on....

in a court of law you must have a real hard evidence,proof and not just a hearsay.

so do not surprise if we have DAP cybertrooper and its sympatiser who love to manupulate, spread lies and master of cheater.

The majority of this community is also single handedly responsible in polluting our country environment.

and they even had the nerve threaten to migrate to other country.

bro,
its gonna be four next time... plus yours!

From a serious subject...to accusations of Rocky.... under M payroll.....me ..agent of Dollah....and full of shit stuffs...who owns this or that house.....making real issues..into nonsensical stuffs too.
Is this the latest way..to confuse readers by UMNO agents?

Then, you are a stupid dumbhead to comment on this thread.