A Spin or an Outright Lie?

The two stories reproduced here are essentially the same Bernama news article: the first appeared on Bernama on-line and the second one lifted from there and published by the NST On-Line.

At the hands of NST's spin doctors, the NST On-line had one quote that the original Bernama story DID NOT:-

"Najib also said that he would not accept any nomination for the president’s post as he was commited to the succession plan."

Now, where did that come from, Kali? 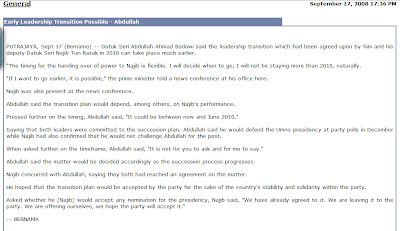 2) The Bernama article in NST Online 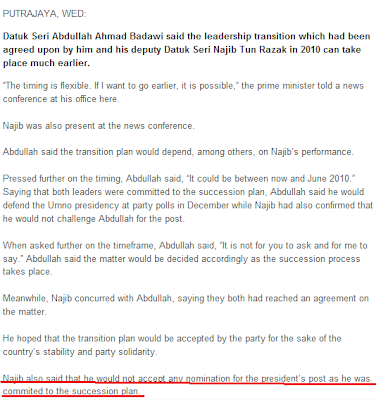 The last line is pretty much a lie lah. They are too lazy to spin already. Cincailah. NST is gone to the dogs. Rest In Piss.

I wish Najib and company would go and disappear already.

Do you believe in the transition plan? They can't even be honest in their reporting. They don't even mind lying.

This Kali character is the lowest form of life. The type who will go for the Haj to give the impression to PM that he is a holy character, then to come back and celebrate by wining.
Similarly, what kind of Haji would be be spinning( read lying) in the NST?
Its people like him that will cause the ultimate downfall of his political master.

My take on the swapping of portfolios.

Nothing is sacred anymore.

on hindsight.... i actually think there's a sudden effectiveness from UMNO to diffuse DSAI after 916... they seems to have done more in a day than they have been able to do for months....

feels like they r outdoing themselves....could it be a puppet master's return??

I HEARD THE QUESTION BRO.

He said they have both offered themselves, now he leaves it to the divisions. Nothing more.

You and TDM wrote about spin doctors today. Rocky Bru name was mentioned again by TDM in latest posting.

The more I see them both together in press conferences, the more they remind me about the movie "Dumb And Dumber".

The ship is sinking yet these goonies is fighting over who is taking control.

Why is Najib saying one thing, Pak Lah said the other? (Pak Lah said succession plan unchanged but Najib said it is up to the delegates)

Why when the so called "wayang Anwar" suddenly become a threat?

Why fund managers shying away when the FDI index shows improvement?

Why can't both of you accept the facts that majority Malaysian wants you out?

Why threatened ISA on prospective new leader with numbers?

Be a gentlemen for a change, don't be a bunch of cowards hiding behind ISA. We need leaders with balls.

(BTW, had given this guy a ride from a Ku Li function in Tumpat back to KB in `93. He was with ST or Reuters then, can't remember. But I think I'll have to charge him, with 1000% per annum interest, since he's now `loaded')

I had previously thought NST "was getting better and more open". Indeed, some of the journalists ARE that. But now this... SIGH.

Should that stop the divisions from nominating him?

Like Umno members voting the opposition in the March 8 polls in protest, the divisions can and may still nominate Mohd Najib as a sign of protest against Abdullah.

I think Mohd Najib has either been misquoted or he hasn't yet learned to accept the fact that the ultimate power lies with the delagates.

What if they nominate neither Abdullah or him for the top post?

He could be left high and dry.

I do not discount the spin -- the Malaysian Insider is at work.

But not at Bernama?

An OUTRIGHT lie of coz! Spin is when u make up something different from what was said.

But, when you add a statement which never taken place at all.. it is a LIE!

About time Mr Truth gets to the bottom of this.

Having so many untruths flying in the country is no good as it hurts the economic climate and responsible reporting/ writing.

Is SPINNING an ACT of SEDITION?

Excellent Rocky. Is this the last straw?
aMiR

Both are Bernama articles. No spin by NST. The one appeared in the NST website is from Bernama. However, the news agency had since updated the article with several changes (re article 1).

Look into Najib face yesterday and you can tell that what he is thinking off, is 'sure, I am for the plan unless someone else says otherwise..'

Never really believe the local news as it's been spun that the real truth is diluted.What happen to real professionalism in the media of this country.
Owners of media beholding to its masters!Sheesh!!

Hmm....just give Najib the Ministry of Finance. He will just like a puppy...licking up his boss. I thought Najib would be smart enough. So I was wrong. The fourth (4th) floor must be laughing!!! Had he been patient for another 2/3 months he would got the whole country.

Your name is mentioned in the last Tun Det post. You know what is post is read by ppl whole over the world. Tak caya...Singapore n British press amik statement dari blog dia la...

Hi All,
Kalimullah's nst 17 Sept - (Majority tired of the mind games Anwar is playing) refers Lim Kit Siang as wily old fox.
Ho Ho Ho.....What a man!!! he dares to call others. What better name you call him?

If one is part of UMNO, no amount of spinning or even real remarks will get you into trouble. UMNO chaps ( and supporters ) can even blog about accusations and voila -- it is the truth in the eye of police.

First of all Najib never said that. His stance on the matter has always been, he will leave it to members to decide if they want to nominate him, but he will not ask them to do it! NST when Najib takes over as PM needs to be on the right track as a respectable newspaper.

media spinning have gone overboard nowadays, until you can't read the mainstream newspapaer without that nauseated feeling.. over the news.

it's like reading in toilet..! where you have to hold your breadth and try as much as possible to self-filter all the news that you're reading.

Even when you turn on the TV set at your home to listen to Primetime news.., again your intelligence is insulted over too much spinning and overlly negative comment when the news feature anything that doesn't aling to pak lah, umno or BN..

that's why ppl turn to your blog.. in hoping to read un-biased news .. and looking for another perspective.

actually spinning the news is one of the "sunah" inside the HADARI concept.

wow, an old crook criticising the current crook. hmmm...i tot that would qualify as sedition. Why not level sedition charges against Tun?? do it la...might as well cos Dollah is going down anyway.

Shame on the NST. Why do people still read that junk? It's not even suitable to wrap stinking fish in the market. I use it for my dog to poo on.

It was an after thought. Najib's men called up the paper's editors to request them to insert it.

But another version was that some do-no-good fellow requested it to sabotage Najib to make TDM blow his top.

Be careful of what you read these days. Too many "misquoted", "misreported" items that can get you detained under ISA.

There are many "evil" forces at play. That's why we are in such a mess.

23. The bloggers have attracted a huge number of supporters with Rocky Bru having more than six million hits.

When it comes to UMNO, history has shown that No2 does not mean ticket to Premiership.

None will ever know who Abdullah might be in favour of, can always hand it over to someone else after party elections.

rocky, i was reliably informed the 4th floor boys were at work again during the so-called meeting between pm and dpm to discuss the transition plan on sept 16. photos of pm and dpm appeared in the papers a day later.

apparently pm's press sec by the name of teoh took a picture of pm and dpm with a third party in attendance to discuss about a book. the photo was immediately sent to bernama which reported the 2010 transition plan would proceed as planned. now that's a real spin whereas it was not discussed at all. how low can the 4th floor boys go? lower ground?

can you verify this?

Know the Difference: Transition, not Handover.
For the moment, the UMNO leadership crisis appears to have been averted with the announcement of the cabinet portfolio swap between Prime Minister Dato’ Seri Abdullah Ahmad Badawi and his Deputy Dato’ Seri Najib Tun Razak. As recently as last week, analysts and commentators were anticipating Najib to make a move on the Presidency before the year’s end. And why would they not? After UMNO Vice President Tan Sri Muhyiddin Yassin rekindled the debate about Abdullah’s position, Najib appeared to position himself for an assault on the post when he remarked that the divisions should decide for themselves when the transition should occur – essentially informing that he was more than ready to receive nominations for the post of Party President.

But with the portfolio swap, Najib may not see a need to gun for the Presidency – and by implication Premiership of the country – so soon. Notwithstanding the fact that a transition of power is, as Abdullah quipped, a process and not something carried out overnight, Abdullah must be credited for such a bold move. Skeptics have characterised it as a calculated political decision to neutralise any potential threat from Najib. Political considerations there definitely were, but by paving the way for Najib to take helm of the Ministry of Finance, Abdullah has also demonstrated magnanimity and sincerity to groom his successor for the top job in 2010.

Being Prime Minister with little experience in managing the country’s economy will likely prove a mammoth task for anyone. And as it turns out, Najib is no ordinary figure with an ordinary past. With ample ammunition for the Opposition to take aim at his credibility – the SAS (Sukoi, Altantunya, Submarine) scandals spring to mind as illustrations – a Najib administration could use a head-start in spearheading economic recovery at a time when global financial uncertainty is affecting countries in this region, too.. It is further also to Najib’s convenience that the Budget for the year 2009 has just been announced with much of the implementation left for him to oversee. As such, Najib does not have the baggage of others’ inefficiency to contend with – a prevalent concern whenever an economic plan is carried out.

As things, at least for the time being, cool down with regards to any contest for the Presidency of UMNO, it would be interesting to see Tun Dr.. Mahathir’s next move. Commanding a yet formidable following, his end-game for quite a while now is to unseat Abdullah as Prime Minister. His peculiar friendships with Tengku Razaleigh, Muhyiddin and Najib are telling – those individuals are all nothing more than instruments to his ultimate goal: the downfall of Abdullah.

Ultimately, Abdullah’s supporters will hope that the PM’s move will be repaid with loyalty by Najib. Even to many who may not be Abdullah’s biggest fans are wary of the damage that an open contest will cause the party. Even they would gladly take two more years of Abdullah over the prospect of an internal split that will likely occur should we witness a repeat of the embarrassment suffered by the late Tun Ghafar Baba at the hands of a ruthless Machiavellian by the name of Anwar Ibrahim.