Consult Johor first. In a letter today to Rais Yatim, the Foreign Minister, Tengku Razaleigh states why the Pulau Batu Putih's arbitration proceedings are still INCOMPLETE. And demands that PM Abdullah Badawi and his Cabinet do not pursue with Singapore any matter regarding Pulau Batu Putih or Pedra Branca without including Johor in the proceedings. For the State, he says, "retains territorial jurisdiction on some matters, including its territorial seas". 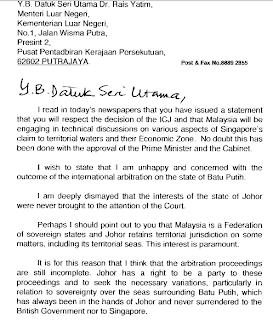 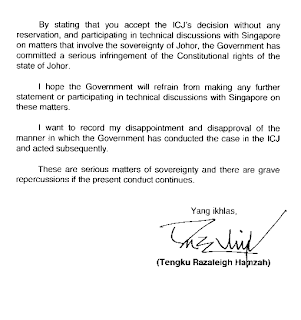 Of course when we got our Independence, the terms of Independence were that the new independent country of Malaya should respect and uphold all treaties that colonial Malaya had entered into.

And of course if we had NOT agreed to those terms, we would NOT have got our independence. We were forced to accept those terms.

So all those treaties and agreements were NOT entered into by an independent and free Malayan people. Someone should highlight this.

Now hear this too. When Singapore joined Malaysia on Sept 16, 1963 (thus making the Malays a minority in Malaysia - which is why DAP a/l PAP is so eager to celebrate this particular day) the British passed an Act in the British Parliament stating that they were giving up sovereignty over Singapore and that the new sovereign was Malaysia.

If the British did NOT pass this Act, they could still claim Singapore as theirs. Note this point because it is important.

In Malaysia when Singapore joined us, we too had to pass an Act of Parliament recognising Singapore as our sovereign territory.

Now here is the question. When Singapore left Malaysia, there was no Act passed in the Malaysian Parliament to legalise the event. This means legally the whole of Singapore is still Malaysian territory.

These two points must be highlighted clearly, especially to future generations of Malaysians and Singaporans.

The FACT that Malaysia is a Federation of SOVEREIGN STATES...
has all been destroyed by the BN administration.

If Malaysia is indeed still a Federation of Sovereign States, let the BN administration observe that central tenet of true federalism.

What a load of rubbish... the Federal Government has been contemptuous of the sovereignty and rights of the States.

It is about time the the real sovereignty of the states be restored again.

The Federal Government must be kept and contained to its Constitutional size... other it ends up as a tyrant upon the States.

"Now hear this too. When Singapore joined Malaysia on Sept 16, 1963 (thus making the Malays a minority in Malaysia - which is why DAP a/l PAP is so eager to celebrate this particular day) the British passed an Act in the British Parliament stating that they were giving up sovereignty over Singapore and that the new sovereign was Malaysia"

I thought Singapore DID NOT join Malaysia.

It were Malaya, Singapore, Sabah and Sarawak joined together to form Malaysia on Sep 16. No?

It's Ku Li's attempt to garner support from the Johoreans in his bid for the Umno presidency.

It may and may not work.

I don't personally fancy Ku Li becoming Umno president but to chuck Pak Lah out, why not.

No need to freeze talk, because Rais said it's a WIN WIN situation.
I don't know if to laugh or to cry about what he said.- Ex Neutral.

I am told that there is a land currently kept as reserve forest in Singapore, near the Orchard Road, belonged to Johor Sultan. When Singapore was sold to Singapore (I suppose was between Johor Sultan and Lee Kwang Yew) and there was agreement that this piece of land will never be developed.

So essentially, the entire Singapore was part of Johor. Is there any history book to read? Any reference? I am lazy to check... just based on what my friend who live in Singapore said.

Mr Rule of Law mistakenly thinks he is the law. His head must have grown pretty big.

I would like to disagree with the anon at 5.21pm on Malaysia did not pass an Act to recognise Singapore independence.

The short title for the Bill is called Constitution and Malaysia (Singapore Amendment) Act, 1965.
You can actually google it.

The Hansard dated 11 Ogos 1965 which can be downloaded from http://www.parlimen.gov.my/hansard.php proof that the Speaker had informed the House that Yang di Pertuan Agong has assented to the said Bill.

Just to make this clear to everyone. We do not need more rumours.

Just because the current Government is inept doesnot mean the Govt back then was too.

Now hear this too. When Singapore joined Malaysia on Sept 16, 1963 (thus making the Malays a minority in Malaysia - which is why DAP a/l PAP is so eager to celebrate this particular day)...

BIGGEST loads of rubbish I ever come across. It's we, the East Malaysian, wanting this day to be remembered. We felt insulted, ignored, taken-for-a-ride all these years and now this rubbish!

For the record, DAP is not a East Malaysian party.

For those who had not realized it yet, DAP is a West Malaysia based party.

Oii Johoreans! You need a Kelantanese and a Kedahan to fight for your rights? Where are your so-called fierce leaders? Shahril, Musa or Hamid? Are you still calling these people your leaders?

lol, so much for the anonymouse claus. silly bolehsians get excited when they pcc abt taking over SIN, sure beats fighting over batu kachang puteh eh?

sabah and sarawak should never have been part of bolehland, kena wasted for 50 years

Didn't the Chief Executives of Singapore and Malaysia sign the Seperation Agreement?

Did Malaysia not declare its formal recognition of Singapore as an independent country when Singapore left the Federation?

Did Malaysia not also declare this recognition at the UN and supported Singapore's membership of the world body?

If Malaysia failed to pass the necessary law, then Malaysia is at fault administratively. So much for our poor and shoddy handling of administrative matters that has caused us to lose this and that.

Also don't forget we are still technically and legally under Emergency rule as we have passed so many Declarations of Emergency but have yet to remove any of them except in 1960 against Chin Peng and geng?

So how efficiently do you think our country is being run?

As for Razaleigh's letter, I think Foreign Affairs matters involving international relations are handled by the Federal Government NOT state governments. It is a national matter. But as we are a Federation (people tend to forget this), it is the responsibility of the central government to consult the state and then to represent it as well at international level. Such consultations are an internal matter between Federal and State and if there is no consultation, then it would be our own domestic shortcomings.

The ICJ has already made its judgement and we should proceed based on this judgement as we have promised to do so. The talks on Pulau Batu Puteh and the other two rock outcrops should therefore continue.

If Johore now is not happy, then it should bring it up with the Federal government and maybe ask for compensation. That will be our internal matter and should not hold up any on-going talks. Remember, our image and reputation is also at stake.

Oh, by the way, I am surprised that Razaleigh wrote to the Foreign Minister in English and not in the National Language.

Didn't you notice that our side now has omitted the word "Pulau" in front of Batu Puteh in referring to the matter because Malaysia lost the dispute to Singapore in the ICJ. Just because Malaysia lost, we deliberately omit "Pulau" to lessen the pain of humiliation. Now we want to give the impression that Pedra Branca as the Singaporeans call it, is not an island but a cluster of rocks. We oppose the international right of an island to claim territorial waters. Had we won the case, I have no doubt that we will officially retain the "Pulau" in front of Batu Puteh. What our govt did in removing the word "Pulau" and the pro-mainstream papers now officially conform to the govt decision shows we are nothing but a bunch of sore losers. Even if we try to hide this, THE WHOLE WORLD KNOWS ABOUT THIS and that we are a bunch of SORE LOSERS! Malu tersangat!

Rocky, u publish 1 comment though there are no added nickname...!!!

1. anonymous 5.21pm thinks that Singapore is still Malaysian territory. Nice try dude, but Tengku Abdul Rahman had released a big pain from Malaysia in 1967 so lets keep it that way OK, we have enough political trouble as it is.

2.Saudara Hantu Gigi Jarang you are right, and I must add there are other Johor Malay Ministers besides Hamid and Shahril and they are:

Well, I suppose everybody is too busy with their Ministerial duties and the upcoming UMNO elections and probably thinks that sovereignity issues at their home state of Johor Darul Takzim is not important after all Rais already said that its a win-win situation and aiyah its just a small batu in the sea. I wonder what DYMM Sultan Johor thinks about a Kelantanese prince higlighting publicly about sovereignty issues regarding Johor but not Johor Ministers themselves, hmmm.

3.Speaking of batu, Saudara anonymous shame!shame!shame! what are you so shameful about. Let me comfort you, the ICJ finds that Sovereignity of Pedra Branca/Pulau Batu Putih belongs to Singapore. So Malaysia(Rais) has accepted it, thus we should now call it as the Singaporean calls it i.e Pedra Branca which is in Portugese and means white rock or Batu Putihlah. Let me give you an example, say Singapore Government named their street as Orchard Road so do we here in Malaysia wants to call it Jalan Orkid? So saudara anonymous we are not sore losers, we are only respecting Pedra Branca's new sovereign awarded to Singapore ,unfairly, if I may add by the International Court of Justice.

In a battlefied the defeated brave General will pick up and move on to the next battle but we have one General Ku Li who stop at a corner and cry....

Ku Li is too late my dear, you don't have an idea how to survive & recover. You are not a General but just a recruit waiting for calling up.

/// Now hear this too. When Singapore joined Malaysia on Sept 16, 1963 (thus making the Malays a minority in Malaysia - which is why DAP a/l PAP is so eager to celebrate this particular day)///

What utter rubbish. DAP and Pakatan chose this date because that is Lee Kuan Yew's birthday lah, you idiot!