Please Buck Up! Blogger Ahmad A Talib has finally run out of patience. He is not getting enough access to the Net. He's experiencing too many "drop calls". He is fed-up. His Expresscard is not working well. He is paying too much. The telco staff are toying with him. 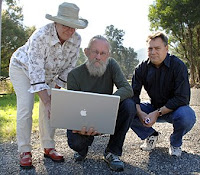 Down Under, people get vocal over poor Internet service. Click here.

as i commented once, msia streamyx of bband is shi-tty totally... wanna boast wireless on the go and whatsoever not but cant cope with the realibilty..

again as i said look at singapore, thailand... singapore is beta testing 10mbps bband.. thailand is going on 3.5G on the cheap... msia on the other hand living on the trees!

once streamyx down, takes 4 days to get the service up and running... yet have to pay thru our noses...

when u call streamyx, they treat u like donkeys asking u to do the standard stupid troublshooting method that my 3 year old kid can comprehend better..

The expression "What will be,will be" is used to describe the notion that fate will decide the outcome of a course of events, even if action is taken to try to alter it.


(Lyrics written by Jay Livingston and Ray Evans
for Alfred Hitchcock's 1956 re-make of his 1934 film
"The Man Who Knew Too Much" starring Doris Day and James Stewart.)


When I was just a little girl,
I asked my mother, "What will I be?
Will I be pretty?
Will I be rich?"
Here's what she said to me:

When I was just a child in school,
I asked my teacher, "What will I try?
Should I paint pictures"
Should I sing songs?"
This was her wise reply:

When I grew up and fell in love.
I asked my sweetheart, "What lies ahead?
Will we have rainbows
Day after day?"
Here's what my sweetheart said:

Now I have Children of my own.
They ask their mother, "What will I be?"
Will I be handsome?
Will I be rich?"
I tell them tenderly:

Funny you should say that 'cos I was just thinking why don't bloggers in Malaysia take on the telcos.

This comment is not so much about poor telco service, which happens everywhere, even Down Under.

Content on blogs depend on the network to distribute but if the telco's network plays big-brother gatekeeper, all content is down.

The MT issue is a classic example. Having an independent Ombudsman is important, MCMC does not qualify. There are also tons of reporting worldwide where independent Ombudsman actually do their job and fines are meted out, from EU$50,000 to USD$500,000, all in the past 7 days. So, it works.

Here in Malaysia, we don't have this experience because most think it cannot be done. Actually it can be done.

Anyway, here's a question, I'd like to ask, seeing as you do have large numbers of comments and visitors.
"What is the role of telcos in a society which depends on blogs to stay informed?"

I hope you could put this question out to poll. Or not.

I just hope I don't end up waiting 4 years for my Streamyx connection like one of AAT's poster. Ouch..Talk about waiting period.

The worse is that in my area Maxis is intermittent, Celcom I dislike, Wimax not yet around. Pretty much stuck with having to go lepak in Mamak and other WiFi enabled restaurants..

'Whatever will be, will be
The future's not ours to see' (Song 'Que sera sera')
Regardless if you're busy as a bee
We can't from our own destiny flee

It means bilions lah. That what it means. We will pay thru our noses for these services and Ahmad Talib will still be complaining 'Where's the beef?'

Cut them some slack lar...MCMC bz censoring blogs so they got no time to get telco chiefs to buck up also...pity them cause censoring blogs is such a difficult thing to do wei :P

The bill! 2 meals @RM40 plus ordered one Martini in long glass with ginger ale, one orange juice, two glasses of water – RM193!!!

After monumentally embarrassing to overseas guest arguments with a) poor waiter and b) reluctant management tool Bill finally amended to RM134 – a superb event spoilt; a KL visit highlight destroyed

Cabs - both Limo and 'Budget' extortionate from KL Menara

Remedy - take courtesy bus to bottom of hill and hail a meter cab on street: save RM+++++