Polytikus' Last Posting. I still remember the morning Li Tsin (pic) called me about the 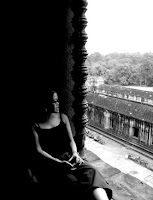 defamation suit NSTP was filing against me. It was January 2007, she was reporting for Malaysiakini. Like many who were following Jeff Ooi and I in our (still on-going) legal battle with the newspaper group, Li Tsin became a friend. I remember urging her to shed the Anonymous mask and let the world know who Polytikus really was.

Yesterday, she wrote to wish Happy Malaysia Day and to say goodbye.