Where Cronies Hang Out

Cafe Chef and Brew. I probably won't ever be seen at this cafe at Plaza Damansara, thanks to a blogger's account that this is where the rent seeking crony types go el fresco while they wait faithfully for the owner of the the big black SUV bearing the no plate KJ10Q to arrive. 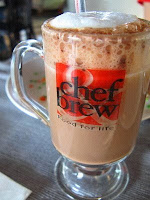 "I spent a while sipping dish water while watching numerous people carrying thick files go up and down the stairs and hanging around waiting to be summoned upstairs. I must say that KJ must be doing very well for a former Timbalan Ketua Setiausaha Sulit di Pejabat Perdana Menteri to this successful business person. Life must be amazing for this young man."

I won't repeat what else this blogger says about the SIL, the FIL and the state of the economy, etc. Read it yourself h e r e.

If this article is true and I suspect it is, malaysians are in for another 4-5 volatile years, at the end of which we drop down the index of every survey of corruption, transparency, best place to be, whatever. The gods must be angry with us.

This is why the present PM has got to go pronto!
Right from Day One, the same people have been calling the shots and been awarding contracts to their cronies.
Often the PM is not even aware who has been given what.These decisions are left to the SIL and the son.
Looks like its business as usual!

Rocky,
Most people are not aware of the power the SIL yields and how rich he came to be. KJ10Q, a black Lexus Jeep (twice more expensive than Lexus SUV), is only one car in his stable. There are Volvo SUVs, Audis, etc. House in Damansara Heights, office in Damansara Heights,... MILLIONS distributed during his campaign and millions regularly distributed to Umno Pemuda heads in various cawangans. Pak Lah does not make ANY major decision without consulting SIL and his son Kamal. We are doomed if he stays as PM.

Please Support and Lead us in the campaign,

We need your help to make the campaign BIG.....

below will be the idea:

the campaign will be involved everyone from various political background, religion, races...

What is the campaign?
Choose a day (sunday),maybe only few hours, the campaign participants will not drive out, hence, the road will be empty during the campaign, it can express Rakyat's unsatisfies to the world without any MOGOK,
the campaign is simple...just stay at home....

Where the money coming from?

10 storey building in Tropicana area, no joke in value.

KJ10Q ? what state is this registration number from? 'KJ thank you'?

Wah syiok lor . Can eat ,drink and be wealthy many times over at one go . Have to go to this cafe from tomorrow onwards .

"KJ10Q". Now that looks to me like a Pulau Langkawi Registration number. Now, we all know over there it is tax free. So this very rich Bumiputra kid is also entitled to drive his duty free car on the main land!! Why can't my good friend Ahmad, Ali and Mohammad also do the same? O.k. la....Rocky, for that matter, you too?

Wish him and who ever..."Retire Young Retire Rich"

Plaza Damansara is the office of Budi Penayang, Nori's office and also other family business hub.

Surely Family CEO would be in charge!

Something interesting about Khairy go

Bro,
How come no aknowledgment of MM's cover story yesterday? After all wasnt the jurno a product of yours??

another machai of Tun M.. Tun M is IRRELEVANT as he can no longer recall his memory. Just send him off to Rumah Kenangan.

Johor Corporation Kuala Lumpur office is also in Plaza Damansara . I guess easy for them to see Mr Khairy.

well KJ10Q, looks like now he is stuck at quest no.7. will he be able to get to be umno youth president? let wait and see.

Thanks for the exposure Rocky, never had to moderate so many comments before.
Looking forward to Stoke booking their Premiership place this sunday.

KJ10Q = KJ thanks you M'sians for allowing him to climb to where he is today?