A day trip to Singapore, a job interview

"He told me, a mad gleam in his eye, that we were going to get there. And this time, I had no doubt that we would." 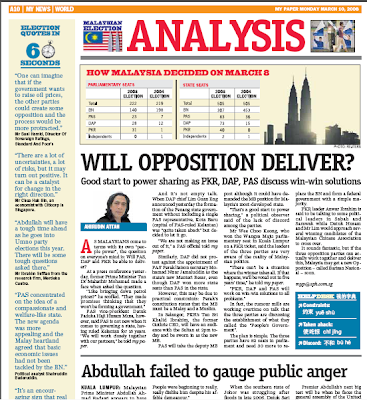 This was to have been my last piece for Singapore's mypaper, the daily I've been writing for throughout the two weeks or so of the PRU12 period. It was published yesterday. The Star has a different take on its front page today, Parties find themselves in a quandary trying to form governments.

I was in the republic for a day trip yesterday. Drove a fellow blogger there for his job interview but he's no longer that enthusiastic about the prospect of working there as he was before the election. It's a brand new era in Malaysia, he said. "There doesn't seem to be a good reason any more to leave and work elsewhere."

While he attended his two-hour interview, I met a nephew and an old friend from a computer firm, and was interviewed by the National University of Singapore, which is conducting a research to gauge the influence of blogs and the Net in last week's General Election. (They were supposed to interview me in KL but since I was in Singapore, we decided to have it there). The varsity will be talking to YB Jeff Ooi, and I have given them a couple of other names to contact. RPK and Haris Ibrahim , many would agree, helped make the difference in this election. [Click here for Malik Imtiaz on Haris: "He told me, a mad gleam in his eye, that we were going to get there. And this time, I had no doubt that we would."]

After his interview, we had tea with an editor from the mypaper. I've agreed to write a weekly column for them on Malaysia, starting soon. Will let you know.

hopefully our great tolerance for mediocrecity over the last 50 years can be changed , as otherwise we will still be behind all our up and up neighbours altho race/religious issues will still be an unsolvable major stumbling block

So you, too, being wooed by the Singapore establishment? I'm slightly bemused, considering how you've ranted on about Singapore elements in the Pak Lah administration. Just be wary of the red dot, even though you were born there. I don't trust them.

Lim Guan Eng of Penang selects an Indian and Malay as his deputy chief ministers. That's the Malaysian spirit.

rocky bro... it's nice to see you going back to writing regularly.. :)

once again, we live in exciting times eh? :)

I thought the same with Attila too.Whats with Mypaper?. Are they independent? Or another PAP mouthpiece like Straits Times.Can there be independent press in Singapore?

Another blogger, I believe, who made a hugh impact on raising political awareness among younger generation is none other then Mr. Kenny Sia (kennysia.com).

Congratulations Rocky..on the "official" status granted by NUS for the interview..ie. being one of the bloggers effectively influencing our nation's political history! Malik, Haris, Jeff, Elizabeth - all deserve it too.
Looking forward to your column here in Singapore, good luck!

Rocky
The headline is arresting and mischievous. But after reading the "full" story, I'm quite relieved. Phewww ...
aMiR

Selling out too Rocky? What a shame. But of course, you have a thing or two to teach the Singaporeans so that's ok.

Next victim: the PAP and its
"high income" Ministers?

expect more negative news about the new state government from now till the next election.
think haris should seize the momentum and give FPT a big push.

Go to the link to "Free Stories" to read these reports.

After reading your 'posting ' about going to Istana Negara last monday morning and at about the same time you were on the way to SIN, I am beginning to wonder who
you are ?

Hey Rocky, if the MSM, and the country that you love cannot or afraid to give you a column or offer you a job, well take what you can, you have a family to look after!
Good luck!

Anon 5.51pm wrote
Rocky,
After reading your 'posting ' about going to Istana Negara last monday morning and at about the same time you were on the way to SIN, I am beginning to wonder who
you are ?
5:51 PM
--------

Don't worry, there aren't two of me. I went to Spore yesterday, set off about 8 am, friend's the interview at 2, had tea with mypaper about 5, and reached the Press Club about 10.30pm, just before the kitchen closed (at 11pm).

The "Please Go" protest was on Monday, 9 am. Couldn't make it because I was only told about it about 11.30pm the night before and I had plans with the kids.

The next thing you know is that you will be invited to the Istana in Singapore for a chat with the MM. He will want to find out your take on developments in Malaysia.

An invitation for a chat with the Spore MM is like the Good Housekeeping Seal of Approval!

hey! your blog is really cool! can we exchange links?
i have added you hope you do the same