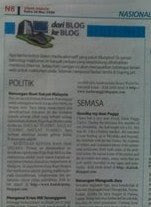 Sinar Harian's Dari Blog ke Blog.
The Karangkraf's daily started this column yesterday and will make it a permanent feature.
Expect the other papers to follow suit soon.

Pliz read howsy.blogspot.com. I really laughed at the stupidity of UMNO MPs.

Sharing my take on the "self-tapping feel-good" community of fellow bloggers and its impact on the march-8 election.

True, the malaysian bloggers came out armed to the teeth with their fingers, so to speak, in this election to teach BN, especially UMNO a lesson.

To my mind, the rallying point of bloggers was Malaysia-kini, the news portal that sought to counter-balance the MSM and which did a wonderful job. Malaysiakini's reporters able to give its readers a different contest and frame of mind on the local social and political issues. And Malaysiakini has a good standing among the internet-savvy malaysians and especially among the bloggers.

In early part of the 2004 election, the Blog-of-the-Moment was your very good friend,Jeff Ooi's Screenshot after Jeff joined up with Malaysiakini when Steven Gan gave Screenshot a spot on Malaysiakini called "Malaysia's he Most Influential Blogger."

On hindsight, it is correct to say that Jeff/Screenshot was a trail-blazer with the sprouting of social-political blogs, against those diary-chit-chat blogs popular in those times.

In many ways, Screenshot opened up the door and sensitise many of the diary-chit-chat blogs to repost Screenshot comments and Malaysiakini's news and became more and more upfront and courageous in their commentary on local issues and politics. This as you know widen significantly the awareness of local issues amongst the mostly uninterested malaysian readers, especially the younger readers of the 18-35 group.

Towards the later partof 2005 and onward, Raja Petra's Malaysia-Today took the center stage with Malaysiakini.

In my view, Malaysia-Today evolved into a hybrid Malaysia-kini-cum-Screenshot with plenty of upfront bravo of Raja Petra. Malaysia-Today attracted a huge following amongst the young, both local and overseas. Many came to see Raja Petra as the voice which could not be heard for all the decades, Raja Petra spoke for them.

By which time socio-political blogs sprouted like tau-geh in the country.

The ingredients that resulted in the role of the internet on the general election were the counterbalancing role of the Malaysiakini as a deliverer of local politics, the principled-stand of blogs such as Screenshots, Rocky's Bru, MarinaMahathir's blog, Nuraina's blogs etc etc and the activism of Haris Ibrahim and Bernard Khoo's Zorro Unmasked etc etc.

Such a recipe became very portent... and led to the humiliation of the UMNO-led Government to the most embarrassing election result in UMNO's history. It led to the disappearance of the Presidents of MIC, MCA and Gerakan in Govt (the Cabinet) and the loss of the stretch of the northwest coastal states the crown-jewels of Malaysia's economy.

Who should we thanked for:
1) the chap who invented blogging
2) Mark Zuckerberg together with Andrew McCollum and Eduardo Savaerin who invented FaceBook
3)Chad Hurley, Steve Chan and Jawed Karim for inventing YOUTUBE
4) Bill Gates for the computer softwards
5) Of course to Sir Tim Berners-Lee, who voluntarily made sure that World Wide Web (WWW) remained free for all of us to use.

UMNO and its equally dumb coalition partners were too sucked up in their own importance and stirred in their own juice, failed to realise what hit them until was too late.

Easter Europe has its Orange Revolution,Phillipines has its People Power Revolution on the streets.

Malaysia...we have our KEYBOARD REVOLUTION.

why there is no news from blogger on following :-

The damages to be paid to the plaintiffs were for claiming that Nordin plagiarised articles in the Malaysia Today website and the 98th edition of Suara Keadilan in November 2006.

Nordin and UUM had filed a lawsuit against Raja Petra, PKR, Suara Keadilan group chief editor and the editor.

We reap what we sow, I guess. Hence, I'm certain some bloggers will feel vindicated to an extent for sticking their necks out to ferret the truth from the BN administration.

With BUM2008 forthcoming on May 1st, I hope the support for this event will be even better than last year's inaugural gathering. Especially with speakers like yourself, Syed Ahmad Idid, Azmi Sharom, Lim Teck Ghee, Jeff Ooi, William Leong, Haris Ibrahim, Steven Gan and Jac Surin. I hear that there might be a 'special guest' speaker. Could it be the new MOI chap?

One thing is certain. Due recognition will not be given to recalcitrants in the SL/JY/K nexus coz they won't show up in real life, preferring instead, their imaginary virtual lives.

Looks like blogging is bigger than rock n' roll.

Dear anon 8.24pm,
Raja Petra did write an article in his blog about him being sued by a man called Nordin as feature on news on tv3.
read here
http://www.malaysia-today.net/2008/content/view/5023/84/

Information Minister Shaberry Chik said today that people turned to the Internet and Blogs because they were deceived by the Opposition. He further went on to add that the MSM was fair and impartial in their coverage in the run up to the Elections.

Either Shaberry Chik has just arrived from Mars or he is a bloody idiotic liar! This moron thinks we are stupid just like his boss Pak U Lah. Any idiot can tell how bias the MSM was and is continuing to be today. We don't need Wong Chun Wai, TV3 and Utusan Malaysia to remind us how sickening and bias the MSM is in Malaysia. Why can't this idiot get out of his denial mode and accept that the people are sick and tired with all the lies and spin from the MSM.

Wanna know something sunshine? One of the reasons the BN regime did badly in the GE was because of the crap that we were fed by the MSM. Thamby, what you idiots did was an overkill! If you guys think that by setting up BN blogs gonna help you, you must be dreaming. Only an idiot would want to read your trash and spin on the Net. We already got enough of it in the MSM. As for your dreams of blogging,"Keris my ass!"

Thanks to frank for the overview. It was correct to say Screenshots was somewhat the kickoff, and RPK and gang sort took it further by aggregating as well as writing some really explosive stuff.

It is indeed like night and day. Suddenly we are not just seen as losers with an axe to grind by the mainstream media.

It takes a beating at the polls for them to see that.

BTW Karangkraf is hardly highbrow. Maybe putting blog views actually helps its circulation, or they think so. It is cheaper than paying a columnist to write for them I guess.

if you cant beat them, join them, now everyone wants to jump on the bandwagon of blogging, it's their new machinery to win the next election

Maybe it'll be a good way for people to know more about SoPo blogs and diversity in opinions.
Great move I'd say ....