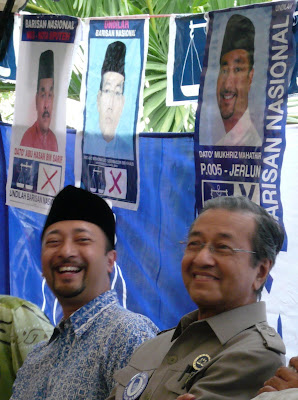 As a boy, Mukhriz Mahathir used to follow dad to file his Nomination papers for the General Election. Yesterday, his own boy was following him around on his campaign trail. Mukhriz is running for MP for Jerlun , Kedah. I've just finished an interview with him for Singapore's mypaper, which I will add to this posting first thing tomorrow morning. Pix by Azrin Zizal.

I hear that Shahrizat has tried to "oil" you. Is it true? She tried to get you so that you stand by her side and take a photo. You are my man. Avoid such people. They are walking dead.

For Mukhriz, honestly he is the only UMNO member that I want to win. But unfortunately it doesn't help because he will be curtailed and finally trampled upon. Anyone who therefore expects that not to happen must vote for DAP, PAS and PKR.

I read your commentary "Women bickering over women-vs-women contests" in the Singapore my paper, Mar 3.

Now, did Datin Seri Rosmah (yup, the wife of the Deputy PM) commit a major boo-boo when she said, according to your commentary:

"Women should stop bickering over the issue. Yes, we want more women reps in parliament. BUT WE MUST EARN IT. AND WE MUST GET THERE BASED ON MERIT, NOT BY WAY OF A QUOTA SYSTEM."

Of course, Rosmah was referring to the JAG (Joint Action Group for Gender Equality) demand that at leastg 30 per cent of seats should be contested by women.

But it would have been opportune to ask Rosmah if the merit approach, as opposed to a quota system, should also be applied to other areas in Malaysia - such as education, scholarships, recruitment to the civil service, judiciary, police, armed forces and GLCs, etc....

I am a tad surprised, Pak Rocky, that you didn't pick up on this Rosnah remark....unless she claims that she was misquoted.

And the Opposition should blow this up by saying that the wife of the Deputy PM believes in meritocracy, not quotas!

Because you can't have meritocracy in just one area and quotas in all the others!

yeaaa, Mukhriz my only UMNO-man! He sure to be a successful and people-friendly YB. all the best, Datuk!

Considering that you once called a bunch of folk Singapore operatives, what would we need to call you now that you're writing for a Singapore based paper ?

And quite unashamedly talking up your friends and un-elected, self-claimed and self-appointed representatives of the blogging world through AllBlogs to boot.

one thing people loves his father then, and still loving the grand old man, is for the charismatic and brilliance of his actions.

even when his 'elegance silence' moment, people know hes doing something. and everytime he opened his mouth, you better listen because its not just omong2 kosong.

so, does mukhriz posses the same characters like his father?

he is never been in spotlight since the 'honest' opinion on UMNO's YDP speech during last year's AGM. maybe he was 'shunned'? but the point is, hes never been tested and thats why we havent seen him that much.

i'll give him a chance to show what he's capable of.

To all wise voters, please watch this important video!!!!!


Vote for your future, vote wisely

There's pro and cons being the son of politician.

Whatever it is, be yourself and prove to us how good you are.

I like Rocky, who's real identity everyone knows. Now go suck on a lollipop, you anonymous troll.