From pro-Mahathir to ISA. street demos and the State of the nation in 2008.
You probably remember the Young Professionals Chamber of Malaysia or Promuda for its shocking pro-Mahathir stand back in 2006 when the ex-PM lashed out at his predecessor. After the "storm" [in which Tengku Zafrul , who is now head of Tune Money, quit to protest chairman Don Rahim's support for Dr M, according to Miss Tan's piece here] the movement fizzled a little.
This year - which many believe will be the General Election Year - seems to be a comeback-in-a-big-way year for the apolitical Promuda.
It says it is Going Global and will provide a platform connecting young Malaysian professionals in over 100 universities and cities around the world.

It opens 2008/1429H account with TWO surveys for young Malaysians:
1. Street Demonstrations and the ISA
2. State of the Nation 2008 Survey (Part One: The Economy)
Click here for more details. 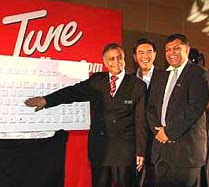 p.s. Anyone knows what happened to Don Rahim, the chairman of Promuda, after that "storm" of 2006? Can't get a decent mug of the guy on the Net. There are plenty of Zafrul's, pictured here with Nor Mohamed Yakcob and Tony Fernandes.

Tengku Zafrul is the CEO of then Avenue Capital, before it was taken over by ECM-Libra.

I guess Tengku Z has a lot of hand in the "smoothing out" of the highly controversial corporate take-over, which actually drew so much attention of professionals such as Minority Stockholders Watchdog Group Bhd., for the alleged wrongful treatment of account, deflation of proper net value of Avenue Capital, 'unorthodox' over pricing the valuation of ECM Libra shares and of course, the most famous one and 'landmark move' amongst the merchant bankers; the "impairment of goodwill" (against nothing!), tantamount of over RM 300 million from Avenue Capital's books and thus automatically pushed down pre-consolidation the value of Avenue Capital shares.

Of course numerous complaints were made to Securities Commission were left unheeded, so much nothing more than "your complaint have been noted, thanks"! Despite all that hoo-haa, Police reports were actually made and your guess is as good as mine.

Then the whole world saw the real 'WAYANG' when Tony Fernandes appeared in the main scene of ECM Libra-Avenue (as reported by Star Biz 28 April 2007), despite that Riong Kali and Khairy Jamaluddin purportedly have sold of their shares, in the dismay of public attention August 2006.

Now, we see how Tengku Z had been rewarded for his 'work' and 'allegiance', conveniently head Tune Money.

Recently, in a year end wish list, Tengku Z wanted to sell of his 'under utilised' RM 1.1 million Porsche Cayenne. How the hell does a thirty-something salaried full time professional manager afford such a 'cool toy' like that?

Still, its an interesting development to watch, when people do one 'wayang' after the other.

Don is still actively running the online promuda discussion thread which I am an active participant of it.

Cronies, books and wealth
Greed corruption transparency deny
On the right horse gets the wealth
Manipulation connected to the cookies jar

Complaints and letters
Put aside gathering dust
Years in years out
The same logic applies effectively
Where is the story really?

don's around. i know him well since our university days. he's now taken promuda underground and masterminding promuda's global reach to young professionals.

his writings are still visible to the young professionals community.
http://groups.yahoo.com/group/promuda_circle/

funny thing is the powers-that-be say he's a clone of dr.m. they're afraid he might do on paklah what dr. m did on tunku in 1970. plus since he was a national chess player, they think he's capable of bringing down paklah and the 4th floor gang. so they're wary of him and until now he's under surveillance 24/7. don knows it. even mustapa mohamad, promuda's advisor before being sacked by don, and tan sri nor yaakob are shit shared to take his calls for fear of being of dropped from the cabinet, thanks to kj and the gang. shows how insecure those people up there are.

few people knew that it was dr.m's office which called don in 2006 asking him to make a statement to help dr.m since no one was willing to back the old man up. don was reluctant but agreed out of pity to the old man. he sticked his neck out. but now the old man is leaving him to hang out to dry. plus kj and the gang are whacking him quietly. but he doesn't care.

i won't discount him though. he'll make a comeback. he's one tough guy.

Now, who has more followers?

promuda my rear end.. a dysfunctional webpage...tried the damn survey-- at the end the survey results do not tally - if one takes the survey (which is actually a leading one) - one must give a answer within the choices given(there is no none of the above option) - after wasting my damn 5 minutes - i note that the number of respondents to Q1 exceed that of Q2 and teh number of respondents to Q3,$ etc do not tally. Hoy crap - and this is run by the young professionals of Malaysia - if you have any self pride - please go jump in a sewer - please don't pollute the river.

The mismatch in the number of respondents to every question is due to some respondents getting disconnected while taking the survey. Since the system will only record the last input leaving the rest blanks, this explains why the number of respondents to Q1 sometimes exceeding Q2 and Q2 exceeding Q3. It can never be the reversed though since Q1 always precedes Q2 and Q2 precedes Q3 unless the survey is configured to receive even blank answers. This mismatch does not in any way affect the survey's integrity. I know this since my company has commissioned a few professional web surveys in the past using very similar technology which promuda is using. Those not familiar with professional web surveys like devilsadvocate may find the mismatch intriguing.

He'd do anything, so that he can opportunitize the situation and come out a winner. People like this no loyalty for anything, but money!