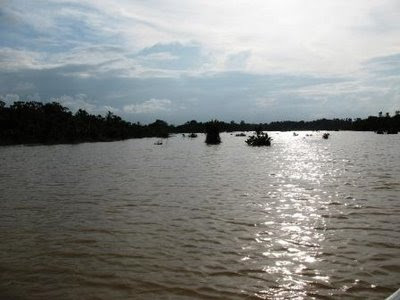 Mother Nature's wrath has left 30,000 people homeless and more than 20 dead in Kelantan, Pahang and Johor. Blogger Pasquale, who was in Pahang to lend a helping hand, reports that "there was no shortage of food (for the victims), but more is needed". Story and more Pasqualensa pics here.

Another blogger, Sheikh Kickdefella, accompanies Husam Musa, Pas' strongman, to Tendong, where they bumped into the BN's local Yang Berhormat and had a brief exchange on the freedom to smoke. Sheih's story and pics here. 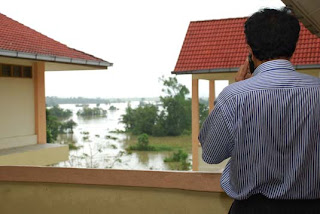 Commenter Capt (R) Azhar Lin left an info for anyone in the Klang Valley who wish to help:

In wikimapia there is a satellite photo of a flooded out area of Kota Bharu from the previous floods. I think it was in 2004 or 2005 according to the date of the satellite photo. It gives you an idea of what the floods was like. You can see the flooded out padi fields and some of the roads under water.

The Drainage & Irrigation Department - DID has a water level monitoring system, such as for Pahang
http://infobanjir.water.gov.my/pahangw.htm

Did this one been used to alert the residents and to take the most possible remedy?

From the gradients, Pekan should be the lowest and so the most affected area.
Any emphasis been done on the drainage of these area? Or, alert system be imposed?

It looks like the authorities are better prepared this year, last year in Segamat was worse...

Every the floods come and go. The government have spent billions on useless projects and to date nothing much has been done to solve the flood problem...

Has the BN government got their priority all wrong??????

Or it it their political ploy to show their face when the flood happens???

Yes, lets all chip in to help!

BTW Is Pak Lah in the country or Australia now?

May I also show the other collection centre as follows;

And some recent photos by some of the 4x4 members who were busy scouting the flooded areas in anticipation of the coming relief distribution in the following website;

We have been in close liaison with MRCS reps on the ground for information as well as collecting our own ground data. The trend this year seems to point to the state of Pahang suffering heavy flooding and if last years pattern holds true, the worst may yet to come.

Thank you sir for highlighting this issue. The hardship faced by those who were hit with this catastrophe is unimaginable.

May God bless you. All the best from me.

no money to contribute after :

the recent hike in many necessities in life.

the plunderings by the govt that rob us of our livelihood.

the plunderings that ate into the relief funds for these victims.

If these victims are wiser by now, they will know what to do next the next GE. We shld stop feeding them when the govt is not doing their part.


I may be cold hearted but I am realistic.

Now the sleeping beauty
Better think twice on the corridors
The floods will come
Many deaths will be paid
For the greed camouflages as developments
A heavy price to pay; better do without it

First. My apologies for hijacking this space.

Just like to wish you and your protem committee members, Selamat Hari Raya Qurban, Merry Christmas and EVERYBODY a more productive, wise and healthy NEW YEAR 2008 of the RAT.

To all Bloggers across the spectrum, wishing you all the good things that money cannot buy, hope, peace, honesty, time, friendship, goodwill etc.

Where are the roxannes and mr smiths in this posting where we would like to hear their 'invaluable' ideas and hecklings. Is it because these are mere social issues and only particularly affects certain group of people they dislike so much?

Why should the victims be punished (by not 'feeding them', as you said) because of the government's incompetencies?

Yes, we are all burdened by the recent price hikes but i dont think our 'misfortunes' are as great as the flood victims'. At least we still have roofs over our heads.

Hahaha for once, I'll disagree with many of the comments.

The flood is government's (or AAB's) fault? For God sake, be rational. No matter how prepared we are, no matter how good the Drainage & Irrigation Department is, no matter how many superb, world-class architects we hire to design better drainage system, no matter who's the PM (AAB, Samy Vellu, Kit Siang, Tian Chua, Nik Aziz, Husam Musa, KJ, Naina Merican etc) - the flood will happen, at God's will.

We (except the non-believers and atheists who do not believe in God)always forget the Power that be, He who controls everything. Contrary to some opinions, this flood isn't "God's punishment". If you dont know or choose to be ignorant, just know one thing - the work of God is always a blessing in disguise.

It's high time to be apolitical, to put aside our differences, to care regardless of race, religion or skin color, to lend helping hands....And it's high time to this blog readers who love at name-calling, fist-throwing and vulgar-chanting to channel their enthusiasm and energy for a better cause...Because actions speak louder than words....

Try to be in your realistic shoe when God return the same favour to you..and everybody around you seem to be cold hearted also at that time..

Life is a big wheel... even the Klang Valley people still at risk with the flash flood..

Who knows you might end up stucked in traffic while the Gombak river overflow...

As a mortal..put the arrogant aside please.. like misfortunes will never ever knock your door..

If you have nothing for help at least have some pity for these people, will you..

Last but not least, stop blaming the God ..God is not a scape goat for human wrong doing to nature as like Samy Velu always put it for reasons ...

Blamed Him ?dare you ask for His mercy? What for He gave you brain if you never wisely make use of it..