Umno-EC lottery. The news article does not tell you how or why. It just says that Umno delegates stand to win RM5.25 million in prize money during the Umno general assembly this week.
No, I don't think you can call it money politics.
The Election Commission is involved, so it must have something to do with encouraging Umno members to register as voters. 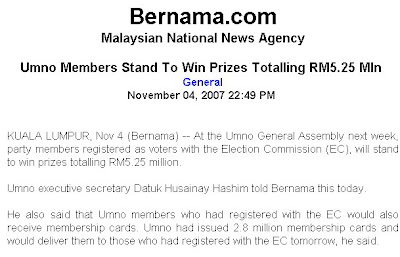 OK! lets register but I dont have to necessary vote for them, right?

In BolehLand macam macam can happen.

Just shows how independent the Election Commission is????

As long as they are indulging in a gamble, it is fine with me. I guess I only get worked up when UMNO becomes puritanical! So UMNO, go go go for wine women and song!!!

I applaud the intention to get more Malaysians registered as voters. I am also curious to know where the prizes were sourced from. Were they sponsored by UMNO members and delegates?

Forget Courts Mammoth where u can only become suku jutawan.

This one is better boss!!!

This is legalised form of corruption.
But then, lottery is also HARAM!

so this is a form of halal gambling, so what's next? - halal beers?

The country wants upright leaders
Fighting for the nation spread the wealth
Nothing for themselves, cronies and families
It is for the services to the people and nation

Let the story spreading far and wide
Into the villages, towns and cities
Open up the peoples’ minds
Don’t get fooled by a few
To control the majority

Keep your panties on!

This is simply a money laundering exercise. I would wait to see who the winner is. May end up being KJ's sister, aunty, or grandfather's pet cat.

Aiyah, RM5.25 million is just kacang to the UMNO members.

nothing matters in this corrupt party, except dole. there is no logic in this. to goad members to register with the EC by dangling $ infront of their eyes. what a way to go, truly UMNO way.

Next thing they will play dice with the electorates: vote for me and you stand to win a trip to Perth, where a yacht from turkey will await the pleasure of your cruise, inclusive of three-day two-night stay at one of those mansions, shopping not included.

There's no way anyone will know if that money didn't come from the taxpayers, hard earned by people who include those who will never vote for Umno, who cannot be Umno delegates, who will always vote opposition, who never bother to vote.

You want to see how the line is being drawn day by day? That's another example for you.

Soon, their lordships will lord more over you. What's next, toll again ah?

There are people who died and still dying in war for the cause of freedom, independance and ultimately, for the right to vote, the right to chose their Government in other countries. Back to Malaysia, there are still so many poor people, we see heart wrenching documentaries on hard core poor people still living without basic amenities, children not going to school and not knowing when is the next meal ready. Imagine what this few millions can do for these poor people. Distributed to them,even if it cant promise fancy housing, at least it can feed them for the next few days or weeks, provide the much needed school books, school shoes or mend a broken roof. But then, how stupid of me, this cant be the priority, election fever's just round the corner.

Selling my rights for RM 5.25 million, that's a bit cheap in my opinion...lol.

RM 1 billion, I might consider, and then I will setup my own government.

Wow! UMNO have actually revealed its true essence of patriotism practiced by its leaders and members.

Bowing down to the almighty ringgit coz nothing else will move their butts.

It's been said that UMNO can only win in the next GE through monetary incentives and if this is any indication, particularly, with the high profile gathering of delegates for the UMNO GA, I guess there's an element of truth.

bro rocky, is this true or r u pulling our legs? 5mil is a LOT of moolah!