A (real) blow to Press freedom 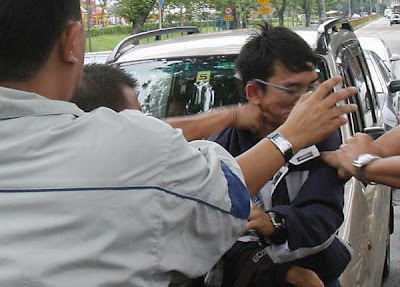 This picture shows a Guongming Daily photographer Koh Chun Sing, who was covering a briefing by an Opposition MP, taking a hard blow in the head, allegedly by an Umno member, according to Malaysiakini. The journalist has lodged a police report.
The National Union of Journalist or the National Press Club should speak up on this incident.

Story and more pictures at Violence against journalists ... Umno style.

The Second Blow (updated 2.30pm, Sunday 18 Nov 207)
Good of Norila Daud, the National Union of Journalists president, to issue a statement on the issue.
But Norila didn't say what needed to be said. The NUJ should condemn anyone who attacks a journalist who is carrying out his/her duties or who threatens bodily harm to the journalist. It does not matter if the perpetrator is Umno or DAP.
Instead, she said:

Those who invite the media to cover events must take responsibility for the safety and security of the journalists.

The sponsor or host who invited the media to cover an event must also ensure they were not doing anything illegal that could risk the safety of the journalists.

So lame. Our journalists have gone to war-torn countries and covered street demonstrations (which are all illegal in the country), bloody riots, and party scuffles (where chairs and tables can fly). So if Shahanaz had been injured in Baghdad, for example, we blame Saddam?
Another blow to journalism. Read her comments here.

Hi Rocky..part of a photojournalist's job hazard..I guess. Over here, he could sue and get damages

To put things in perspective, I'm sure by and large most UMNO members are rational and law-abiding citizens. Only certain elements in that group are out creating havoc, notably of the Youth variety. My worry is they are seldom chastised by their masters for their irresponsible behavior, leading others to think that their higher-ups "condone" this sort of thing. This certainly does not bode well for UMNO and democracy in Malaysia in general. The other thing is the authorities (police) are slow to crack down on this criminal behavior perpetrated by certain elements within UMNO, which leads to questions of impartiality on the part of the police. Can you imagine what would happen if it was a DAP member that attacked a 'mainstream media' journalist instead?

I think UMNO leaders, notably its Youth leaders like Hishamuddin or Khairy, should come out strongly against such act of violence.

THis is just plain stupid, if an organisation like Umno is unhappy about something, take it to the courts and not resort to physical violence....
They really need to weed out the goons and take action against them

Comparing with the conducts of UMNO and PAS lately, seems like UMNO is the extremist and rowdier party.

With UMNO, you have the license for everything.

good one... sue their ass off.
those amnu people think this country is belong to them and them only.

wonder what 'tokoh wartawan' has to say about this...

I think this is just plain stupid on both side of the tussle. In the first place why this stupid MP provoke the other side, is he just looking for trouble?

The fellow who wallop the journo has no bloody right to act in that manner.

These damned bloody street fight provocateur and fighter has no place for Malaysia, they should be placed in the Borneo jungle irrespective they are from UMNO or DAP!

Let us see what ZAmban has to say over this since he is the Minister of INformation. ARent he not going to protect his source of information? OR maybe his source is just from 4th Floor?

According to zam, who used to be a reporter, this is part of occupational hazard. There's nothing to complain about. In myanmar reporters even got shot. This is only tumbok whaaat

hey mat, you joking or what? Asking Hisham and Khairi to come out strongly against this incident. Monkey see monkey do..that is Umno culture.

Did you see pics of the monkey in Ijok..is he a good example? And the waving of kris unsheathed?

I am sure you must be joking

1. get to stay in a multi-million $ house
2. get paid allowance every month
3. get free everything
4. get shares in companies
5. can holiday overseas as often as you like

can you give me ONE reason why you should complain and rock the boat?

Suprisingly none of the mainstream media reported this shocking incident or maybe it was reported but I overlooked it.Whatever it is I hope NUJ do something about it.BN or opposition parties member NUJ must issued a statement expressing their disappointment and at the same time lodge a police report. Journalist like other noble profesion must be given it utmost respect ANYTIME,ANYWHERE not only during election times.
Bob from Kuching

Looking at images of Umno members beating up people in broad daylight reminds us of scenes in Nazi Germany. Then Nazi thugs were beating up Jews and anti-national elements with impunity. Umno has turned into a national embarrassment. The party appears to sanction thuggery by its members while at the same time preaching harmony. This is hypocrisy at its worst. Scenes of Umno thugs brutalising and bludgeoning opponents into submission were disturbing, have been disturbing and will be disturbing. Every right-minded Malaysia must stand up and condemn the savagery of these actions. If Malaysia wants to be accepted by a civilised world, it must do something.

HOLD ON GUYS...it's not so simple. We have law an order here. We are not myanmar or pakistan

FIRST we'll have to determine the authenticity of the photo - is it really the named reporter in the photo? Could the photo have been photoshopped?

SECOND is that a real arm that delivered the blow? It looked too big and too muscular, could be that of a robot or the governor of california

THIRD are we sure the incident really took place, and took place here in bolehland?

So hold your horses. We have to go step by step:

FIRST wait for how strong the pressure is to investigate. Then if the demand is great enough look for three people to form the initial panel

up to this stage it will take at least 58 days

UMNO thug! what else is new!!

we have the chief youth waving his keris and we see how the no. 2 (SIL) acted at ijok, so we should not be surprise.

of course no UMMNO leaders will come out to condemn this incident. there are 2 sets of law in the country, remember - one for UMNO and one for non UMNO.

bro,
that is the perangai of the arrogant UMNOputeras... who should be blamed for this show of "mat rempit justice"?...the leader of course should bear the responsibility and take the blame...sheeesh ! shame on the morons !

CIJ issued a statement calling for greater protection for journalists. The responsibility is not just with the host. The issue is that state and non-state actors should not attack, intimidate etc journalists. Full statement here:
http://www.cijmalaysia.org/display_story.asp?ID=555
Gayathry, CIJ

i agree that the NUJ statement could have been a little stronger.
you have to speak up for the journalist who was the victim. Asking hosts to be more responsible in ensuring the safety of journalists covering their events is surely not enough.
the least you can do is to tell off the "perpetrator", and then issue a warning to those intent on hurting journalists.

Why am I not suprise that this punching episode happened.And the 'boxer' is from UMNO Youth.

UMNO youth members( esp with positions in the cawangan and Bahagian) are known to flare up easily They are more like kaki pukul or bouncers nowadays.

So far there is no statement coming out from UMNO,be it the sleepy president or the VPs. Why is Ali Rustam or Adnan or Mat Tyson Taib keeping mum about this incident?

But I'm sure a damage control statement will be given out soon.And guess who's gonna get the blame? DAP MP and the photojourno himself!!

Police report made...most [robably it will end on the IO's table for many months.If VK Lingham's brother's report is being peti-sejukkan, this case is less important to the lice. If you want a swift action by the police, go punch an UMNO youth member!

he must have been wearing a UMNO tag or a big 'UMNO' label on his shirt or there an 'UMNO' spelling written all over his face or after he beat that chap there a 'UMNO' chop left on his cheek, how naive he was or should it be us?

Actually... the even more saddening thing is... the crap that spilled out from the mouth of THE CHAIR of NUJ!!!!

So it is RIGHT for the journalist to be tumbuk-ed because YB Tan did not offered to "protect" him????

The journalist should be arrested for attempting to commit suicide by standing in the path of the accidental punch thrown by the innocent thug.

There are two set of laws for two sets of people:
1) UMNO, other BN components and their supporters
2) The rest of Malaysia
How much longer can we afford to live in such circumstances? 50 years after independence the colonization continues this time by our own brethren. Free from a tyrant only to be replaced by another.

I have no confidence in you to protect fellow professionals.

Please resign as the President of NUJ.

president? what standards she carries? take away the partisanship and show some universal values of human decency, miss president. whats wrong is wrong regardless of the parties that are involved in the fracas. if you cant even do that, make way for some decent person to hold the post.