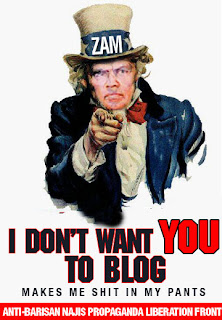 Zam's new mecca. Last week Zainudin Maidin, who used to have little regards for the media in Singapore [read here for one example] and then discovered that Lee Kuan Yew was "smarter" than Dr Mahathir, travelled to Singapore to forge closer ties with the media in the republic and make himself Singapore's disciple on how to deal with blogs. Our "Eminent Journalist" was full of praise of the media and the way Lee Kuan Yew's government deal with the blogs.

Zainuddin discussed the blog issue and how the island republic was approaching the matter in a meeting this morning with his counterpart, Information, Communications and the Arts Minister Dr Lee Boon Yang.
The Malaysian minister said Singapore had formulated a mechanism for the registration of blogs which consistently churned out articles on politics.
He pointed out that Singapore had a class licensing framework to supervise new media forms such as blogs, subjecting them to certain code of ethics under the supervision of the Media Development Authority.
A class licence involves the gazetting of the terms and conditions of a particular industry, and anyone who provides the services within the scope of the class licence will be deemed to have read and agreed to the terms and conditions, and would be considered licensed.
Zainuddin felt that the method implemented by Singapore was practical and it could possibly be modified for use in Malaysia.
"We'll see whether or not this version can be done in Malaysia. I don't know yet but I feel that the method is a practical one," he said.

In an earlier report, Dr Lee said Singapore has set up an advisory council to study the impact of new media. He did not mention code of ethics or the class licensing framework. Neither did he say the Singapore approach is practical.

On the issue of new media, including the proliferation of blogs, Zainuddin said the issue was also touched on during the discussion.
"We do not want to control blogs. We just hope for the bloggers to be responsible, and to be held responsible for what they blog...I share this view and I think the Singapore approach is practical," he said.
Asked to comment, Dr Lee said that Singapore had an advisory council to study the impact of new media, among other things, including the rising popularity and influence of blogs and try to anticipate its impact particularly on the younger generation over the long term.
"We recognise that the blogs are there; that many young people are very enthusiastic about blogging and are becoming very active players in this so-called Web 2.0 where instead of using the Internet to draw information, users are now generating content to be shared with others.
"So this is quite a significant development. As of now, our regulatory approach to the Internet has been a light touch. Our position in terms of new media is that the law of the land applies in the real world as much as in cyberspace," Dr Lee said.

Some officials accused the Western press of conspiring against Malaysia. In May, hard-liner Datuk Zainuddin Maidin, then parliamentary secretary at the Information Ministry, reacted to a local seminar held on World Press Freedom Day (May 3) by saying, “The big problem faced by the Asian countries now after the end of the cold war is the infiltration by subversive elements from the developed countries through their media and the use of local journalists to carry out the agenda of Western media imperialism.” Zam, as he is known in Malaysia, then accused journalists from the Philippines and Thailand of trying to influence Malaysia on behalf of the West. In November, Zam was promoted to the even more influential post of deputy information minister.

Zainuddin said in the quest for political power, people were willing to resort to slander, disseminate lies, use unauthorised sources or choose not to verify the source of the information.

"This is very dangerous as they are writing and taking steps to gain power. Their objective is to topple the government, widen the reach of their political doctrine and assist any parties for political purposes," he said.

Is this not slandering, disseminating lies, and using unauthorized and unverified sources?

Where is your sources or evidence to justify that your statement is true and not merely slandering?

there are two sets lo laws; one for you and me; and the other which is as good as lawless for the government.
in any event, the govt has no choice but to regulate blogs one way or another. simply, the govt cannot allow its monopoly on information or disinformation disssemination to be broken by blogs. once they regain control of information flow, they can relax and conitnue to plunder the country with impunity. just listen to the latest outburst by the venerable mr samy. you want to cry for Malaysia.

pls see the actual code, which i think is onerous for sites deemed to be 'political' or sexual. otherwise, it aint so bad lah

whoa... my poster looks so much better and purposeful here. ZAM should be unremorsely proud he look so good with the top hat which reminds me of The Monopoly Guy.

If Zam were to copy Spore policy, copy first the way Spore deal with corruption or abuse of power!

Hasilox, Well done analogy, Spore has done some things pretty well. We could progress by emulating their Nat Service or their education system, or how they protect their local biz interest by means of their Temasek and GIC offensives. Instead, we choose to adopt their mistakes because some self-serving people think it's "practical"

I agree with hasilox. The people hate corruption, Singapore deals with it wonderfully then learn from them. The people want their voices to be heard, Singapore muffled them effectively, don't copy them. If our leaders can do this, they will get my votes otherwise forget it.

Of all the things S'porean are good at ZAM with little brilliance that he has decided to learn on how S'pore stiffled the free speech.

While he is at it,he would take the trouble ,i suppose,to learn how S'pore deal with corruption, transparency and efficient governing and choose a good leaders amongst their rank and file.The criteria for leadership certainly would exclude people like ZAM in S'pore, as this unprinciple and idealess minister wouldnt even qualify to be an officeboy in S'pore Government.

ZAM didnt go to seek understanding but little knowhow that make him shotup like a tall poppy in a group of mediocre cabinet.
I dont think ZAM would understand when told of corruptions,transparency etc as

"It is difficult to get a man (ZAM)to understand something when his job depends on not understanding it."
Upton Sinclair

Does Zam understand anything at all??

And I thought ZM was in RDC trying to figure out how the Malaysian cabinet can 'emulate' their southern brethren in terms of good governance et al including enjoying salary scales of between RM2.7 million or RM5 million in keeping with the private sector.

Meanwhile, is there any truth that ZM will be replaced by RY in the MOI?

rocky, the poster is good but the wording at below, barisan najis really hurts my feeling.

barisanasional,
noted. as the poster belongs to mob's crib, i will do the needful by conveying your displeasure with the "barisan najis" bit.
thank you.

Thanks to Rocky for informing me about your concern Mr. Barisanasional.

The BN I potrayed are fictional entity that exists in Bolehland or Bedolland. At Bolehland, my chracters runs rampant, they cheat, lied, name-call, siphon and leech people's trust in them. Which country in the real world have you heard of, does so much tragic comedy at one go? ~ehem...

Again I like to reiterate all my 'posters' are fictional unless proven true in your mind. Have a laugh and try not to take it seriously.

Self-humility is a rare substance.

The same with good governance.