If I Were The King

KL, 15 Aug: So I started this new weekly column for The Mole this morning, just before Muhyiddin Yasin sat down for his longest 30 minutes with the Yang DiPertuan Agong. Wanted to call the column Monday Blues but the editor probably misheard me and named it Monday Bru. Just as well, for I certainly didn't get the blues today ... 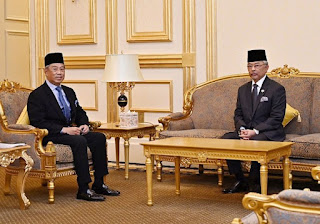 IF Tan Sri Muhyiddin Yassin sends in his resignation today, the Yang DiPertuan Agong will once again have the task of choosing a new Prime Minister from among the MPs.

Yes, this won’t be the first time for this King. Neither will it be any less daunting.

One thing for sure, keen followers of Malaysian politics agree, Tuanku Al-Sultan Abdullah Alhaj would want to do things differently from March last year, when he made Muhyiddin the Prime Minister after Tun Dr Mahathir Mohamad suddenly resigned.

The whole country is wondering what the King would do.

Well. If I were the King, I would make sure, first and foremost,  to remind everyone about the Rakyat’s mandate.

In the historic 14th General Election of 2018, the people voted in Pakatan Harapan.  Dr Mahathir became PM with the promise of passing the baton on to Datuk Seri Anwar Ibrahim after two years or so.

That never happened. What happened, instead, was the so-called Sheraton Move where Muhyiddin, helped by Umno that had lost the GE, slipped in through the backdoor and became the eighth Prime Minister in March last year.

If I were the King, here is an opportunity to return to Pakatan Harapan the people’s mandate to govern for five years or until the 15th GE is called.

The leader of the Pakatan Harapan is Anwar Ibrahim. He is the Opposition leader and he commands the biggest single bloc in Parliament. He was the first to come to Agong’s defence when Muhyiddin and his Cabinet ministers stood in defiance against the Palace.

Together with the 15 Umno MPs who pulled out their support for Muhyiddin following the face-off with the Istana, the King can easily determine that Anwar commands the majority support of Parliament.

If I were the King, I will make sure Anwar …

1. Onboard Ku Li as Adviser or Mentor Minister in his new Government

3. Keep out MPs who are still facing charges in the court or who whose cases were mysteriously taken off by the Pakatan Harapan government after it came to power in 2018.

4. Include DAP in the Cabinet (because MCA is dead and Anwar is the only Malay leader who commands genuine respect from these DAPsters) BUT prohibit them from going on a witch-hunt the way some DAP strongmen, placed by Dr Mahathir in powerful places within his Administration, had gone after their or their party’s enemies

5. Make good your (Anwar’s) pledge to ditch politics of revenge

6. Get all existing Ministers, Deputy Ministers and GLC political appointees to resign so as to allow the Interim PM to retain the ones who have been performing and bring back the professionals to the GLCs

7. Give full support to the Undi 18 initiative. by bringing in young blood to the Cabinet or government institutions and GLCs. In this context, limit the age limit of the Cabinet to 80 (with the exception of the Mentor Minister)

But, before anyone gets unnecessarily excited, I am not the King and I will never be King. In the King, however, we put our trust. And in God, our prayers for this nation.