A lot of people stand to lose

Puchong, 18 Oct: Muhyiddin Yassin will probably be the biggest loser. If Umno leaves the PN coalition, his government will fall and he will lose his majority in Parliament, which means he will be forced to quit and someone else who has the majority support of MPs will replace him as Prime Minister. Which explains talk of a hurried, even panicky, Cabinet reshuffle tomorrow.

A possible bigger loser than Abah is Atok and Tun Mahathir Mohamad, the Old Man they fondly - and unfondly - called Atok or grand dad - probably knows it. The good doctor has been going around to say that it's Risky for Umno to side with Anwar. when, in actual fact, it's very dangerous for Mahathir himself as it could bring Anwar Ibrahim to power. His little party, Pejuang, has endorsed him to be interim PM, till GE15, to save the country.
Even Ku Li has been brought back from the wilderness (after losing badly in last year's election for Umno president) to back up Mahathir, or that's what the Old Man's camp want us to believe. Ku Li has nothing to lose, really (Impressive resume - but Ku Li as PM, really?)

Umno stands to lose, too, of course, because leaving PN means it won't be in government anymore. If Anwar Ibrahim becomes PM, then those in Umno who have signed the Statutory Declaration supporting him may be part of a new government. But Anwar will not be PM if Mahathir and Ku Li can help it. Or if it turns out that Anwar doesn't have the numbers he claims to have.

Some in Umno will lose considerably more than others. These are Umno leaders who have been given important or cushy positions by Muhyiddin when he came into power in March. The ministers, deputy ministers, and those Muhyiddin has appointed as GLC chiefs. Every word they utter, in private or to the media - whether they support the party unconditionally or if they are with the party only if there's no  Anwar or DAP - is being closely watched.

So some of the biggest losers in Umno if Umno pulls out are:

1. The nine Umno MINISTERS who are in Muhyiddin's Cabinet. 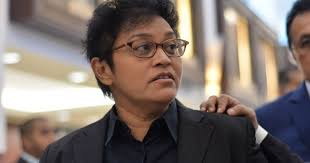 4. The Political Secretaries to the 9 Ministers