Rise in bogus news: Is Hamzah looking to bring back Fake News Act?


Puchong, May 15: If you are looking for alternative take on Malaysian politics that's provocative but not fake, I suggest you give the Third Force a shot. Their news sense these days is quite spot on, right down to the selection of pictures accompanying their articles, I must say.

Take their take on the warning issued by Home Minister Hamzah Zainuddin against perpetrators of fake and seditious news:


The article is in Malay but a picture, they say, tells the story. And in this case, the story is about the sorry state of our social media so infested by fake and seditious news. Since 2018 (which happened to be the year Bersatu-led Pakatan Harapan took over the government), the Bersatu sec-gen said fake news has become "so rampant" among our Netizens. And he warned that he was in no mood to compromise with anyone who "deliberately tries to trigger provocations or threaten public safety and security".

The Third Force included the full brief statement by Hamzah: 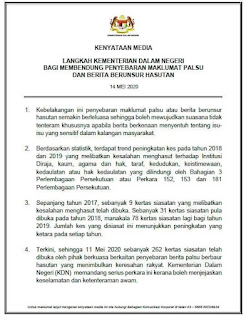 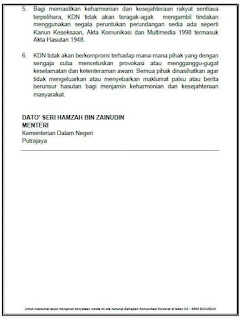 It would be hard to call it a coincidence that the statement was issued about the same time with the release of 73-year old media personality Patrick Teoh from police remand for allegedly insulting the Crown Prince of Johor.

Since Hamzah was part of the government that pushed for the Anti-Fake News Act in 2018 (scrapped in Dec 2019 by the PH government) a lot of people will be wondering if he's going to propose for a similar legislation to deal with the issue. I'm not trying to be provocative here, but I'd wager all my salary during the MCO that the Home Minister  would do it.