Updated #17: Muhyiddin is my PM by Annie
Winner takes all: A musical tribute to the new government by A Voice

The winner takes it all


The loser standing small
Beside the victory
That's her destiny
- Abba

Puchong Day#16: For a reluctant* prime minister, Muhyiddin Yassin sure understands the scope and power of the incumbent. In the short time since his "backdoor" appointment as Malaysia's 8th Prime Minister, he has shown that he has the speed and the will. He was quick to place the whole nation under a Movement Control Order to stem the spread of Covid-19 and surefooted about who needed the government's help most during this terrible period with his RM250 billion stimulus package. But if those were more or less expected of an incumbent government, the quietly brutal way in which Abang Din brings down the sword on his political enemies surprises many, and delights not a few.

Yesterday, on April Fool's Day, he quietly replaced Dr Mahathir Mohamad as Khazanah chairman, bringing along with him Azlan Hashim, who had to leave after Pakatan Harapan's  victory in the general election in May 2018.

Read Muhyiddin takes over from Mahathir as chairman of Khazanah by The Edge. Excerpts:

Mohammed Azlan's appointment marks his return to Khazanah after nearly two years. In July 2018, Mohammed Azlan, former Khazanah managing director Tan Sri Azman Mokhtar and seven other directors had tendered their resignations after reaching a unanimous decision that Mahathir's Pakatan Harapan coalition government, which won the May 9 2018 general election, should determine the fund's new leadership structure.
The others were Tan Sri Raja Arshad Raja Uda, Tan Sri Andrew Sheng Len Tao, Datuk Seri Nazir Razak, Datuk Dr Nirmala Menon and Yeo Kar Peng.
Mahathir had previously lamented that Khazanah, the strategic investment fund of the Malaysian Government, which he set up in 1994 when he was prime minister for the first time, had deviated from its original intention of holding shares for bumiputras.
He claimed that instead, Khazanah had become a convenient vehicle for the previous government to reward politicians and non-professionals with positions and lucrative compensation packages.

The change of guards at Khazanah followed a series of changes and overhauls (ie sackings) at key institutions under various ministries, including the country's largest statutory body MARA and the Yayasan Kebajikan Negara. Read Mara chairman, council members sacked and Syed Azmi temporarily recalled after sacking. Yesterday, Noor Farida Ariffin, the chairman of the Human Resources Development Fund, confirmed the marching orders, Her contract was supposed to run until Jan 2021. Read G25's Noor Farida, CEO and Board members removed from HRDF with immediate effect.

Noor Farida had been brought in Jan 2019 to "clean up" the HRDF. 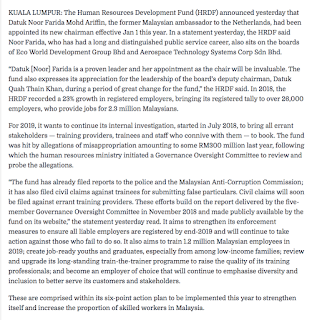 Last month, I posted Will we see PH-stule 'execution' of GLC leaders? Well, it does look like it's going to happen. As the song goes:

The game is on again

p.s I must put on record that under Noor Farida's watch, two prominent journalists were charged for allegedly misleading the HRDF. Both cases were linked to an overseas training program involving the National Press Club of Malaysia and conducted under the auspices of the HRDF before Noor Farida was appointed. The case against Veera Pandiyan was  struck out by the magistrate while in the case against journalist and author M. Krishnamoorthy, the HRDF had offered to withdraw its lawsuit.