Going by this Tommy principle, shouldn't other political appointees resign as well?

Bangsar, 4 March: Kajol joined us for coffee at our regular earlier today, just as Tommy Thomas was explaining to FMT in another part of town why he had resigned as the Attorney-General at the height of last week's "coup". 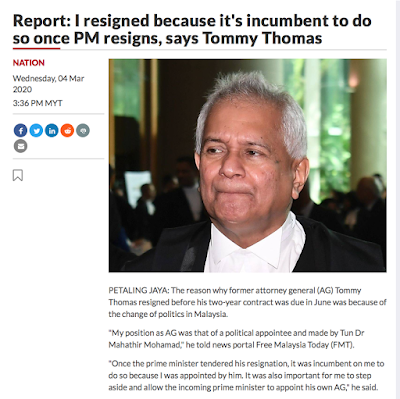 Kajol, a lawyer by training, wouldn't have any of Tommy Thomas' "bs".

"It's an abdication of responsibilites, that's what it is. Tommy Thomas was appointed by the office of the Prime Minister, not by the individual (Dr Mahathir).

"The responsible thing to do, therefore, was wait till a new Prime Minister was appointed. Only after that should Tommy Thomas have offered to resign or left it to the new office of the Prime Minister to ask him to stay or go," she argued.

Mmmm. our Kajol is not just a looker she's got brains, too.


p.s. But if you go by the former Attorney-Genera's principled decision to quit because the PM who appointed him had quit, then shouldn't it be incumbent as well upon the other political appointees, such as Latheefa Koya, the Inspector-General of Police, the Bank Negara governor, the various heads of GLCs (including Zeti of PNB and Rosli Man of Telekom Malaysia) to resign?

p.p.s Kajol told me, by the way, that Tommy Thomas wasn't appointed by the PM, anyway. The Prime Minister only proposed, it was the Yang diPertuan Agong who appointed him.