From fear-mongering to pandemic 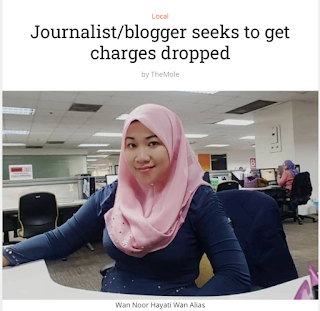 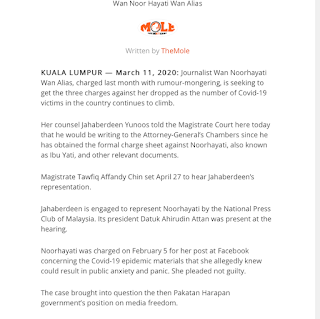 Bangsar, 12 March: The last time I stepped out of a courthouse with moderation advocate Jahaberdeen Yunoos, he was my counsel in a high-profiled defamation case brought against me (and one Jeff Ooi) in 2006 by a news conglomerate and four of its top execs, an affair that would bog (dog?) my career as a journalist and blogger for 5 years (and helped make Jeff Ooi a two-term Member of Parliament). Jahaberdeen was the last in a string of lawyers who offered to defend me pro-bono.

Seeing him again yesterday at the Magistrate court in Jalan Duta, acting as counsel to journalist Wan Noorhayati Wan Alias, 41, gave me a strong does of confidence. It's hard not to feel alright when Jahaberdeen is on your side.

I sincerely hope the new Attorney-General would agree to drop the charges brought against 'Ibu Yati' just a little over a month ago by the previous AG. We all know the Covid-19 better today: the World Health Organisation (WHO) has just declared it a pandemic, Indonesia reported its first death from the virus, and Germany feared that 60-70 per cent of its population will be infected, Tom Hanks is in hospital after testing positive, and our own health authorities have also come out to encourage people to call of public events and gatherings, including religious ones. Even foes agree when it comes to this virus: Tun Dr Mahathir Mohamad has stopped shaking hands with the people and Anwar Ibrahim has adopted a "no-hugging" policy ...