TTDI, 4March2020: Marina Mahathir was supposed to address a closed-door gathering of women entrepreneurs  sometime this weekend in a plush hotel in the city. The organisers had marketed the exclusive conference months ago as a golden opportunity for these entrepreneurs to mingle-and-giggle with the daughter of the prime minister. But after last week's "coup" in Putrajaya, the organisers have called it off. I'm not sure if that decision has got anything to do with Marina's rantings against the man who "betrayed" her father and is now the 8th Prime Minister of Malaysia. But they were enough to make me cringe. 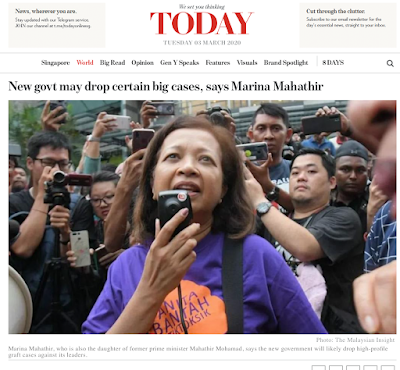 Why cringe, you ask? Because less than two years ago, the Government did drop some big cases involving politicians who were part of the Pakatan Harapan coalition (still) led by Dr M.

I don't remember Marina making any noise about any of it, do you? 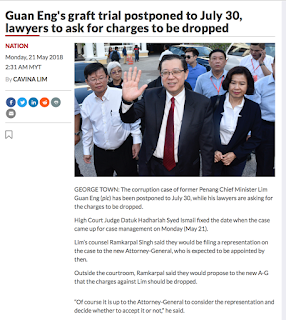 In Lim Guan Eng's corruption case that was dropped by the AGC in September 2018, which took not just the ordinary people but also the Malaysian Anti-Corruption Commission by complete surprise, a retired senior Judge had warned Dr M that allowing it to happen would be of bad faith. Justice should be seen as being done, the former Judge had said.

But  it was allowed to happen. And more big cases were dropped subsequently.

Me, I'll be shocked if Abang Din doesn't learn from that and doesn't listen to the people (including Marina-lah) and goes ahead to drop the so-called "big" cases. Or include any of the politicians involved in those cases to his Cabinet (Guan Eng was made Finance Minister even though the corruption case against him was ongoing).


Please read
Guan Eng's appointment as Finance Minister lauded - The Star, 13 May 2018
Guan Eng's graft trial postponed to July 30, lawyers to ask for charges to be dropped - The Star, 21 May 2018
The rule of law is dead in Malaysia, says Ismail Sabri  after AG withdrew appeal against Rafizi's acquittal - Mkini, 10 Dec 2019