Updated Dec 13:
Only the minister can tell me to go - Hans


Original article
KL, Dec 12: Not everyone present at last Tuesday’s press conference organised by Profima agrees with the association’s call for Hans Isaac, the Finas chairman, to step down. 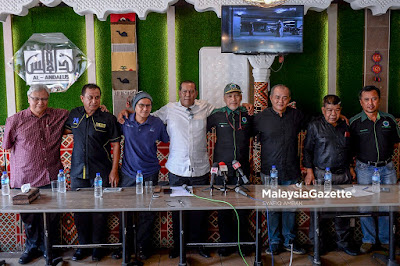 Kamil Othman (far left), the fomer DG of national film development corporation for two years until 2018, claims he didn’t even know that the press conference was to declare support for outgoing Finas CEO Ahmad Idham.

“I had no idea they were going to ask the Finas chairman to step down over the CEO affair”.

When asked his stand on the issue, Kamil said it’s not about Ahmad Idham or Han Isaac. “It’s about what the industry needs”.

And he believes that what the industry needs is a Finas CEO with strong corporate background.

“Columbia Picutres, 20th Century Fox, Warner Brothers, Universal Pictures, Disney Corporation, Paramount Pictures, MGM ... they all have one thing in common: all their CEOs have solid corporate backgrounds. Finas should be headed by such a CEO,” Kamil said.

Ahmad Idham sure doesn’t fit that bill, if that’s the case. He made his name as an actor and a movie producer before he was made Finas CEO in  March last year, an appointment that surprised many in the industry. His tenure was supposed to end in 2021 but this has been shortened to March 2020, at his own request.

Many believed that after his call for Netflix to be censored last month, Ahmad Idham’s position as Finas chief executive had become untenable. He had since denied making the Netflix call.