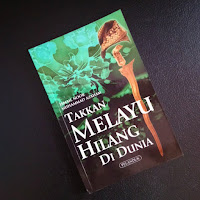 Hazy Puchong, Monday: By the looks of things, there will be many more pro-Malay forums and gatherings from now. The Umno-PAS' Himpunan Perpaduan Ummah  was just an appetiser. It has also triggered all kinds of buttons here, there and everywhere in our political industry. Panic button included or not, I don't know and you don't need to worry about that. Just know that Malay and quasi-Malay political leaders who matter, in government or outside, recognises change in sentiments among the majority Malay population of this country. And, therefore, the need to hedge so one does not end up losing.

The Kongres Maruah Melayu to be held on Oct 6 in Kuala Lumpur will be only the first post-HPU gathering of Malays. This one will be led by several institutions of higher learning, notably UiTM, whose Bumiputera-only policy has come under serious threat after the Pakatan Harapan government took over in May 2018. But it's not an academic exercise, per se. The chairman of the Kongress Maruah Melayu is former Umno man and Najib Razak's Cabinet minister Hamzah Zainudin, one of the first to have switched camps to Mahathir Mohamad's Pribumi Bersatu after BN's defeat in the last general election.
The Kongress is expected to identify the threats facing the Malays today and propose ways to strengthen the position of the Malays in the various socio-economic sectors. Of course, Hamzah and friends are also concerned with the relationship between the Malays and other races. To promote unity, they think that it is time the Government introduce the OSS - the One School System - and abandon the vernacular schools. This is not going to go down well with some quarters at all but as one of the brains behind the Kongress told me:  "If Singapore could do it, why not us?"

Well, we know why we haven't been able to walk the talk but, I say, no harm trying.

I was told Dr Mahathir Mohamad will deliver his amanat at the end of the Kongress, which has encouraged the conclusion that this is an event quietly sponsored by the Prime Minister's own party, Pribumi Bersatu . Wallahualam.

p.s. I am all for any effort to unify the Malays to unite Malaysians, if you know what I mean.