"This will be Tun's last address, bro Rocky. Please do come."

Even without such dramatics from the organisers, I would have been interested to attend the Kongres Maruah Melayu that took place yesterday in Shah Alam. The event promised me all sorts of news ingredients that a newsman would be loathe to ignore. Anwar Ibrahim, the PMiw8 (Malaysia's 8th Prime Minister-in-waiting), who is by our Constitutional definition as Malay as PMx2 Mahathir Mohamad, was not going to get an invitation. After some placating by the organisers, the Tun agreed to let them invite Ahmad Zahid Hamidi, the Umno president, and Hadi Awang, the PAS president. It would have been awkward if they were not there. And,  no, no xPM Najib Razak. It would have been doubly awkward for the Old Man.

And I wanted to get myself a tengkolok and I thought surely they will have lots for me choose from at an event like the Malay Dignity Congress.  During the Himpunan Ummah aka Muafakat Nasional organised by Umno and PAS last month, which I could not attend, I had asked friends to look for the ancient Malay headgear for me. I was told them that a bestseller at the PWTC, where the HU was being held was one called the Tanjak Dendam Mahathir Tak Sudah so I asked them to please get me that particular tengkolok. Unfortunately, it was sold out. Mahathir sells, whether or not he is there.

I'm glad I went to the Kongres Maruah Melayu. I was in good company (even though I was sitting all by myself in one of the "cheaper" seats at the back of the hall) - Siti Nurhaliza and Datuk K, Ustaz Hadi, Rani Kulop, Annuar Musa, KJ, Hishammuddin Hussein, Zainal Kling, Syed Saddiq, Mukhriz Mahathir, Azmin Ali and scores of Malay scholars.

Siti Nurhaliza rendered the evocative Anak Kecil Main Api, a song about the Malays losing out everything in their own land, as Mahathir walked into the packed hall like a bridegroom.

Zainal Kling got the Kongres the kind of controversy it deserved for with his "Malaysia belongs to the Malays" rhetoric. The resolutions tabled by the student reps and one PAS man (on Religion) were as hardline and hardcore Malay as they come. 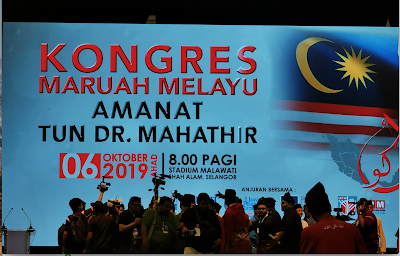 But the climax of the Kongres was also the anti-climax.

A lot of people went there yesterday to listen to Mahathir to talk about - and against - the growing threat against the Malays, their interests, and their special position. Such a threat has been more prevalent, the Kongres heard,  after the last General Election. Zainal Kling and some of those who tabled the resolutions had made direct references to elements within PH itself, especially the DAP.  The organisers had claimed to me earlier that the PM shared the same sentiment.

Me, well, for a while I did entertain the idea of Dr Mahathir actually expressing  some form of remorse for bringing this unprecedented post GE14 lament on the Malays, years after he had had 22 years to be the PM and so many opportunities  at leaving a lasting legacy other than the Twin Towers and the tolled highways ...

Mahathir did not mention DAP in his Amanat. Not even once.

I can understand why some described Mahathir's Final Address as condescending towards the Malays (read Ucapan Mahathir hina Melayu. )  But then, again, what's new? Mahathir has called the Malays names so many times before. "It's his way of motivating the Malays," said one diehard supporter. But even by the Old Man's recent "motivational" standards, I found it distressing when he insisted that our children should be willing to take up the jobs now filled by imported labourers from Bangladesh and the Philippines. Mahathir derided them for being ashamed of those low-paying jobs. "They are ashamed of jobs that pay RM1100 a month. But they are not ashamed of lining up to accept the RM500 saguhati (handout)!" he said in obvious reference to the aid given by the Government (BR1M when the previous government introduced it and renamed BsH after PH took over).

"You tell him to get his children's children to do those jobs lah," an ex-journalist who is about to lose his job shouted at me on the phone earlier today when I told him what Dr M said.

I sent a WhatsApp message to the organiser. "It's far from vintage Mahathir lah, bro." Well, I suppose all that rubbing with the ultras in his new coalition has affected the Old Man's wit, after all.  But the organisers remain stubbornly optimistic. "We will push the Resolutions of the Kongress to be adopted by the Prime Minister. We will." I guess all that Hidup Melayu cries at the Stadium Malawati yesterday have emboldened some Melayu.

p.s. Personally, though, I was not entirely disappointed. I got myself a tengkolok at the fair. It's called, aptly, Tanjak Melayu Menyesal Tak Sudah.