Puchong, 11 Aug: A dear friend lost her son to a road rage incident on the North South Expressway yesterday. A mother's worst nightmare. The young man was alone in his little car, perhaps looking forward to seeing his 4-month old baby at home and celebrating today's Aidiladha, when he got into an altercation with another motorist. There were eyewitnesses. Someone recorded the incident on the mobile, and the video has gone viral, creating a wave of anger.  When and how did we become so mad, so suddenly?

Unhappily, some of my fellow scribes at Utusan Malaysia could not celebrate Raya. According to the National Union of Journalists, its members at the Malay daily have not been paid salaries for months and have had to resort to Ah Longs (Sherlocks, money lenders) to get by. But we all know Utusan has not been facing well even before last year's general election. Long before, in fact. Umno, the newspaper's main owner then, had to step in all the time to help finance the paper's operations, including paying its journalists' salaries. It was a well know fact, perhaps not to NUJ, that corporations - including the government-linked companies - simply wouldn't advertise in Utusan, even when Umno-BN was the government. We put it down to an inherent bias on the part of advertisers.

And after the GE14, things just went downhill very quickly for Utusan.

Umno is no longer the "owner" of Utusan but the NUJ insists that the political party still is, via Aziz Sheikh Fadzir, the chairman, as proxy. And because that is how the NUJ sees it, it demands that Umno steps in to help the journalists. The NUJ even suggested that Aziz dispose of his shares and Umno sell off Utusan's assets to pay its members the wages due to them.  But the real issue here is: how can the union help its members and the employees of Utusan, "since Umno seems to be neglecting their needs"?  Setting up a fund to help the journalists tide over the short term won't be enough. What is the union's plan to help save their jobs?

The NUJ leaders should seek a meeting with the other major owner of the newspaper if it is not too keen o Aziz.  Syed Mokhtar AlBukhary is one of the richest Malaysians and a benevolent soul, a philanthropist, and a long-time major shareholder of Utusan (accused of holding the shares for Umno in the past). Syed Mokhtar, who also owns a huge chunk of Media Prima (after GE14) and The Malaysian Reserve (before GE14), among other media (read Syed Mokhtar, new media mogul), wouldn't allow his journalists at Utusan to wither, not under his watch, for sure! Or should we insist that Syed Mokhtar also dispose off his shares?

My friends at Bernama are not represented by the NUJ, which is a shame because the union would have demanded that the Minister of Finance quit over the latest fiasco at the national news agency. Read Guan Eng orders probe into Bernama or Bernama to extend full cooperation for MOF probe or (I won't recommend this for fear you may feel queasy, especially with the last paragraph) read the press statement issued by the Minister himself ...

Expect a scapegoat at Bernama to be found, blamed and in the spirit of the Hari Raya Korban, sacrificed! 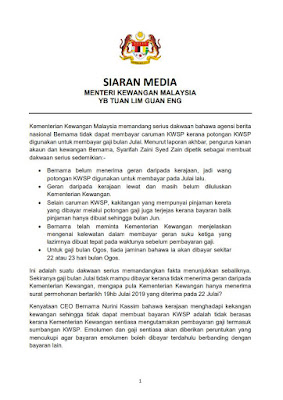 p.s In any case, I hope it's not too late to wish my Dear Readers, Selamat Hari Raya Haji. Maaf Zahir Batin. Alfatheh, Syed Muhammed Danial Syed Syakir.
at August 11, 2019