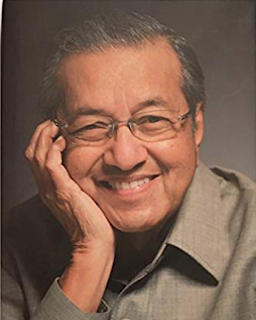 
1. Lynas will stay
2. Telekom Malaysia CEO decided but not Imri
3. MACC chief is a politician


Good things come in threes, they say, but these three announcements sure spoilt some people's Hari Raya.

Lynas so shocked Yeo Bee Yin that the Energy, Science, Technology, Environment and Climate Change Minister ended up issuing a press statement to clarify her boss' remarks, in a desperate attempt to salvage her own integrity as well as her party's reputation for their rabidly anti-Lynas stance all this while.

News of the TM CEO came just days after Finance Minister Lim Guan Eng had refuted a claim that PMO didn't want his candidate Imri Mokhtar as CEO (the MoF had approved Imri's appoointment in February).

The decisions, apparently, were made unilaterally by the PM. In his own words after the ground had shaken violently following the appointment of Latheefa Koya as MACC chief:

"I did not discuss with Cabinet ... I make the decision myself because I don't have to ask the Cabinet as to who I approve".


In other words, "I did it my way". Some will call it the Old way. If you don't like it, go take the highway, baby.

MP Nik Nazmi came out with a long, carefully-worded posting on Twitter out of grave concern over the appointment of his PKR ex-colleague, Latheefa:


1. Thread: Appointment of @LatheefaKoya to MACC

Latheefa, is both a prominent lawyer and human rights activist. Besides other major cases, she was part of the legal team which represented me in my trials related to the Peaceful Assembly Act—for which I am of course grateful
— Nik Nazmi (@niknazmi) June 6, 2019


"More importantly, however, the manner of her appointment, which was decided upon by the PM alone, goes against the promises Pakatan Harapan made in our manifesto. The 14th Promise of the  manifesto states that under a Pakatan (sic) the MACC will report directly to Parliament, rather than to the Prime Minister ... Appointment of these Commissioners must be validated democo.  atically by Parliament". - Nik Nazmi


But beyond "worrying", what will Nik Nazmi do?  What will the "disturbed" Bar Council do? What will a concerned Suaram do, if it sincerely feels that Latheefa is not the right person for the job?

Or, rather, what can they do?

What can Yeo Bee Yin do? With Mahathir's open support for Lynas - and in front of the world media, too! - she is now at the mercy of her Australian counterpart who had been at her mercy for the last one year (and years before that when she was in the Opposition). Read Ahead of meeting with Yeo, Australia's Bill Johnston rejects Lynas waste..

What can Lim Guan Eng do? The Finance Minister got his way over the appointment of CEO for Malaysia Airports Holding Berhad (MAHB) but if he thought he was free to put whoever he pleases, he's dead wrong. Way above him, there are greater forces at work. Same message goes to all Guan Eng sympathisers [like this epistle to The Star, Invisible hands in Corporate Malaysia?).

What can anyone do about the MACC's position? Well, according to Lim Kit Siang's spokesman, the Parliamentary Select Committee can review Latheefa's appointment, but will have no legal effect.

What else can he do now that he is stuck with a Cabinet of Clowns who, after a year of being in the Government, still behave like the Opposition (by opposing key investments like Lynas just because it was the popular - and easy - thing to do); who think they can rule the GLCs like they have ruled the DAP (or like past Finance Ministers ruled GLCs); and who expected him, the country's only two-time Prime Minister, to be controlled and dictated by a mere manifesto?

Mahathir's one-line in Sometimes we get surprises, Dr M of new MACC chief should be a constant reminder to these people:

“Well, (the Ministers) cannot be complacent and think whatever they think will be approved.”


Read also:
"The (Lynas) plant will stay, as Tun said ... we are only concerned with environmental issues", says Mestecc sec-gen
"There needs to be better transparency on such appointments," says Maria Chin Abdullah
Left in the dark, parliament committee to discuss Latheefa's appointment with PMO
Bersih 2.0 likes Latheefa but troubled by appointment process
Azam Baki, twice overlooked for MACC chief position, pledges support for Latheefa