AG's boogie with the Judiciary: What the three ex Judges think

Updated Jan 24
Thou shall not:  One of the ex judges attached this tablet of Commandments, too .. 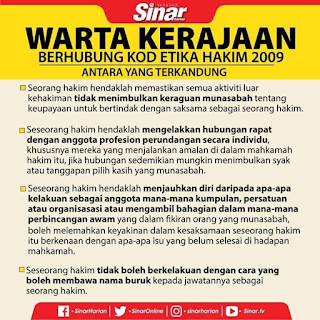 Original article
Jan 22: You remember the 3 ex Judges I consulted with on Latest US court decision on Jho Lo's Equanimity: What it really means, according to 3 Malaysian ex-Judges. I needed to seek their wisdom once more, this time over the  issue of the Attorneyt-General, the Chief Justice, and the Law Minister doing the twist at a recent legal gala dinner. Which got tongues wagging, eyes rolling, fingers pointing and, of course, hips swaying! So much so that Malaysians are generally left more confused than ever.

For sure, we know that dancing is not a crime and not the issue; sometimes. But does the AG dancing with the judiciary create the perception of an AG capable of dancing to the tune of others?

These are the three ex-Judges views, almost verbatim:

Yang Ariff 1:  I used to tell the magistrates not to misbehave in public. In private, it's your business what you. In this particular case, it's not the dancing. It's the free mixing resulting in the lawyers influencing the judges, especially when too much drinking!!

Yang Ariff 2: I love dancing but in this particular case, it is simple: JUSTICE MUST BE SEEN TO BE DONE. The AG should NOT be seen dancing with the judiciary. Attending the dinner with the Bar is okay. We used to do that. All very official. To be socialising and being very familiar raises issues of possible bias-ness.

Yang Ariff 3: You need to understand the different modes of celebration between those in Semenanjung and those in Sabah and Sarawak. In Putrajaya (such gatherings) would proceed without the dinner and dance. Sabah and Sarawak have different ideas. Previously, while the Muslim CJs were still present (at dinner), itineraries were kept formal. Only upon their departure would all hell break loose! But this CJ sure enjoys the "hell".