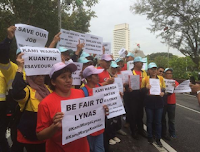 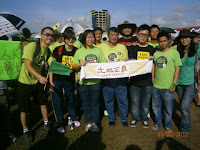 Pictures sometimes lie. But these Lynas workers who are fighting to keep their jobs look like Malays, all of them. And those who want to close down Lynas (and make those Malays jobless) have always been predominantly Chinese.

Am I wrong to see a clash of colours here?

But Annie, I notice, is experiencing the same symptoms. Her latest posting Why YBY and gang want to close down Lynas contains words like "overwhelming Chinese majority", "the support of the Chinese community" and "DAP".

I'm hoping it's just the light, playing tricks on our eyes ..

p.s. The Star has a clip on the rallying Lynas workers at Parliament today. While DAP's anti-Lynas rallies have always been picnic-like, the workers look grim. One was even crying. Watch laaah.