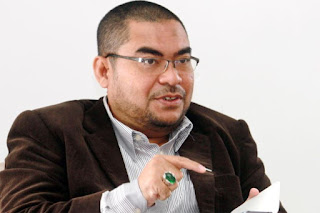 Inexperience + Arrogance = ? This government's problem is not so much that too many of its ministers are green but that they can be arrogant like hell. The Malay has a most apt description for it: bodoh sombong. Minister in the Prime Minister's Department for Islamic Affairs, Dr Mujahid Yusof Rawa (pic), would be the quintessential BS if you were to ask his growing army of detractors. His latest statements on the Tabung Haji affair could seal that reputation for him. Read h e r e where the minister said that from 2014 to 2017, TH was paying dividends to its depositors "illegally".

The facts of the matter, however, are:

1. TH cannot - dulu, kini dan selamanya - pay any dividend without the approval of the Auditor-General. And Ambrin Buang, in this Feb 2016 article, clearly deemed it "legal" for dividends to be paid to the 9 million depositors. Bank Negara was also satisfied with TH's ability to pay, according to the same article: 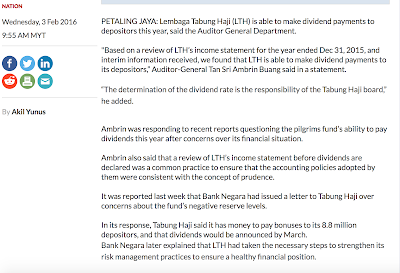 2. Other than the AG, external auditors have always been in the picture. PWC was appointed after Pakatan Harapan won the general election in May (Mujahid did mention this) but before that it was Earnst & Young. It was learned that from 2015 to 2017, the auditors reported asset surplus over liabilities for TH: some RM1.4 billion in 2015, over RM701 million in 2016, and well over RM350 million in 2017.

Now, could Mujahid have been selective or even ignorant when representing PWC's findings? It won't be the first or most radical with this government: Finance Minister Lim Guan Eng pushed Malaysia's debts to over a trillion ringgit almost overnight despite the rosier reality (Moody's maintains Malaysia debt burden at 50.8 per cent of GDP).

But why? Politics, of course!

If one is not convinced that TH is being used as a pawn for the (new) political masters, then try swallowing Mujahid's assurance (at the same press conference where he had just revealed the RM4 billion "hole" in TH) that the depositors will get their dividends this year (2018):

“Now that the restructuring plan is here, if we can fulfil two conditions and if there is profit, then definitely we will get (dividends).


"But that will be announced before the end of the year, we have not close our (sic) accounts for the year yet.” - Mujahid: Tabung Haji paid dividends illegal since 2014 as debts exceeded assets

"He was trying to give the impression that TH was never in the financial position to pay hibah. But…. MAGICALLY…. Tabung Haji will be able to pay dividend in 2018. Why? How? You’ll have to ask Mujahid how he will suddenly pluck RM4 billion cash out of nowhere, especially when the stock market has plunged under the present government – it closed today at a nearly 2-year low." - Mujahid's TH Horror Story - Another PHollywood Production

p.s. I totally agree with former deputy minister in charge of Islamic affairs Asyraf Wajdi Dusuki, who said this government may spook depositors with its alarmist statements on TH. Read Stop issuing alarmist statements and sue TH bosses. Neither green nor arrogant, this Umno Youth leader. Not in this instant, anyway.