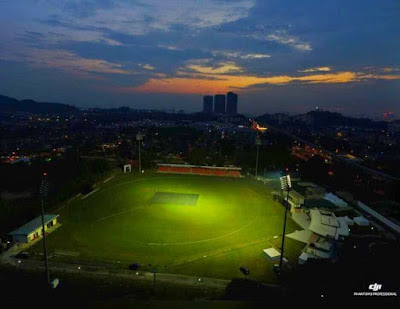 Cricket? Not my cup of tea. But where I live, the cricket stadium - the Kinrara Oval - has become one of the major landmarks for the area. Not too many housing estates can boast of having a playing field, let alone a cricket stadium.  In fact, there are only two such stadiums in the Klang Valley and the Kinrara Oval, "Home of Malaysian Cricket", is world class.

But, sadly, it might not be there for long. Right after the 14th general election, a housing developer had filed in court a demand to wrest the land back from the Malaysian Cricket Association. Cricket fans are up in arms, of course. The local authorities have washed their hands (It's out of our hands, MPSJ says of Kinrara Oval closure) so the cricket body is asking the new Minister in charge of sports and the Prime Minister himself to step in.

I hear the Malaysian Cricket Association has been trying to see PNB chairman Zeti Akhtar Aziz as well. PNB, a government-linked company, owns the developers who're trying to take back the Oval so if Zeti says so, these people can keep their stadium and field. I hope she says so.

Like I said, cricket is not my thing. But playing fields, open spaces and green lungs are and they have become so scarce. If the developers want back the land so that they can manage the Oval themselves, I will support them. If the developers plan to turn the Oval into an integrated sports complex (with public swimming pools, running tracks, gym, etc), I will be all for them. Heck, if they want to revert the area into a park (which was what it used to be before the cricket stadium was built), go right ahead.

But if the developers want that piece of land for more luxury condos and shopping malls, which is what many people suspect they're planning to do, then they may go to hell.