Ex-IGP's son to lodge police report against Mahathir for threats


The Mole columnist* Abdul Rahmat Omar is lodging a police report against the handler of the Facebook account Mahathir The Legend for defamation and threats to cause bodily harm.

Social media owners in Malaysia rarely involve the police in their war of words but in recent months that "war" has become savage and downright ugly. In his posting attacking Capt Seademon, Rahmat's popular nickname on social media, Mahathir had accused the columnist of having been stripped of his ranks when he was in the military and implied that he had used the influence of his father, who was the Inspector General of Police, to avert a worse fate than just to be stripped of his rank.

Rahmat has challenged Mahathir to furnish proof of his allegations but the latter merely repeated the allegations. 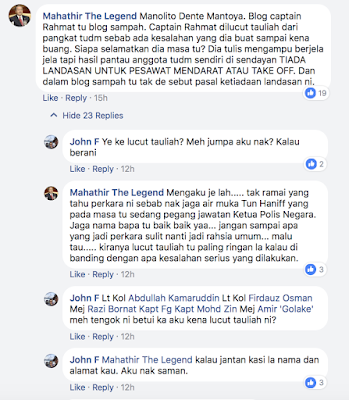 I am not a big fan of police reports and lawsuits against any kind of scribes, but I am even less of a fan when it comes to lies, half-truths and baseless allegations thrown at a fellow scribe, especially by someone who hides behind anonymity.

I hope Mahathir knows Facebook is not an excuse to defame others and neither is it a protection against lawsuits. But I'm quite sure legal aid is not an issue with him; it never is with the Opposition. Capt Rahmat will soon find out that he will be disadvantaged if he takes Mahathir to court ...

* Rahmat has been writing  his column in The Mole since last year
at February 02, 2018