From Sheila to Neelofa
I have come to believe that what Sheila Majid wanted to do, actually, was, really, to champion a cause. Like a lot of Hollywood celebs have been doing. Unfortunately, her tweet the other day on soaring cost of living came out all wrong. She came across as unduly critical of a government whose policies have actually helped improve the people's welfare, especially those in the lower-income bracket. 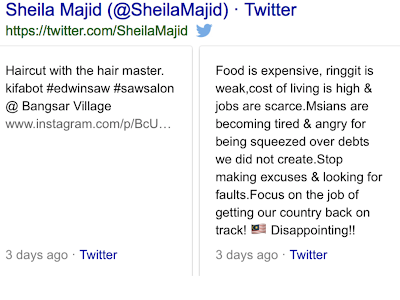 And, unfortunately times two, her tweet was used by Mahathir and Co as proof that "yet another icon has spoken up (against the Najib administration)". Cheap shot, but they have nothing to lose in trying to bring down this government, so why not?

Pro-Najib supporters were also unnecessarily harsh towards Sheila, if you ask me. Like a seasoned journo wrote in her FB, the jazz diva may be all-class when she sings but she ain't that smart. That partisan politics is ugly and manipulative is probably beyond Sheila or the likes of Siti Nurhaliza and Nur Fathia Abdul Latif, both of whom have also recently put their feet in their mouth in their attempts to be political.

I say let those celebs who want to rant on their social media do so. But their managers must do their job and tell their stars that they can actually champion a good cause without looking silly or, worse, stupid. Or without being partisan (unless, of course, they have political ambitions) because that will surely isolate a lot of their fans.

If Sheila is concerned that her fans are spending too much of borrowed money, advise them to be thrifty and to say NO to their desire for what they could hardly afford (like the iPhone X which, incidentally, has become the best-selling iPhone model despite the nearly RM6k price tag, so much for and Sheila's complaints about the government and rising cost of living).

Sheila doesn't have to be super smart to give a good advice and because she's an icon a lot of people will listen to her if she's got something good to share.

In any case, I'm not too concerned about Sheila or Siti Nurhaliza or even less so Fathia because I am not a fan (I did buy Sheila's album Legenda in the early 90s because it of P. Ramlee's songs and I had never heard of Fathia before this). I am Awie, Amy Search, M. Nasir and, of course, Ramli Sarip kinda guy. I dig Joe Flizzow even though I am not into rap. And am forever in awe of Ella and Yuna, too.

We have more than enough icons who are smart, who constantly fight and who speak up (but not to please the old political gods) ...

And then there's Neelofa, an icon who has not only made the tudung fashionable but has continued to make tudung affordable (despite the expensive food, weak ringgit, high cost of living, etc etc). Tak bodoh, tak sombong dan tak bodoh sombong ...