Puchong, 26 Oct: So, Apandi Ali did not listen to my advice. I wrote h e r e the AG would be wasting his time if he goes after RPK, "whose views these days are said to represent the views of some people close to Prime Minister Najib Razak". Well, to each his own! 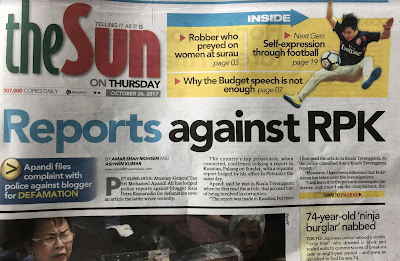 I can't blame Apandi Ali for going to the police. He has got the integrity of the Attorney-General's Chamber to defend. And his own good name to protect. By going after RPK, Apandi is saying that he does not believe that RPK is on Najib Razak's side. If RPK is, he should not be attacking the country's Attorney-General, he should be attacking Najib's enemies, instead.

An old journalist friend called me to find out "what the hell is the problem". And like how old journalists are, he did not wait for my reply. He gave me his 2 sens' worth instead:

"Here's Najib Razak trying to make things work, overcoming obstacles after obstacles as the BN nears the most crucial general election this century, preparing to table probably the most important Budget of all time ... and all these jokers who call themselves his spin doctors are interested in is flex their muscles to prove who's bigger and stronger by bullying and attacking everyone, including the AG, in the name of defending the PM?

Well, what can I say? Najib's enemies are licking their lips and rubbing their hands, with glee.

And because of all this, Khairuddin has officially become Khairuddin "Bangang" Hassan in my book.  I was quite fond of him but this Khairuddin has the habit of calling everyone who disagrees with him "bangang" so he might as well have it his middle name lah!

Someone asked me if it was true that the AG had no authority to set up the taskforce.

Me: "Am sure the AG knows the law better than RPK [and Khairuddin B  Hassan]."