Syed speaks out on "selling out" allegation


"... inviting Geely Holding to take up a 49.9 per cent stake in Proton does not equate to us selling out." - DRB-Hicom group managing director Syed Faisal Akhbar

Kuala Lumpur, 29 May: Everyone but Dr Mahathir Mohamad wants to believe that there would now be hope for the long-suffering Malaysian national car after Proton finally signed the crucial deal with China's Geely. I was beginning to wonder, though, if Proton itself was going to speak out for Proton against its former Chairman and advisor.

Then someone referred me to the interview in the NST Online with DRB-Hicom boss Syed Faisal Albar. Couldn't have been more timely.

You may also want to read Jalil Backer's Please Be Fair to Syed Mokhtar via The SnapShot's Sebab ego, Mahathir media bungkuskan Syed Mokhtar
In a nutshell, Jalil Backer reminds Dr Mahathir that the decision to sell Proton's 49% to Geely is entirely Syed Mokhtar Al-Bukhary's, the major shareholder of DRB=Hicom, which owns Proton... 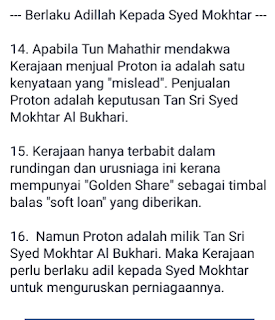 Ideally, we should hear from Syed Mokhtar himself about the deal with Geely and his plans for Proton but he's been known to be extremely media-shy, even before the days when they started calling him Dr Mahathir's "blue-eyed boy". Plus, I think we can consider that DRB boss Syed Faisal Akhbar was speaking also for his boss Syed Mokhtar during the interview with the NST Online.

I could almost hear him - Syed Mokhtar himself, I mean - saying it ..