KL, Thurs: Malaysians probably followed the Trump vs Clinton race more intimately than any other US presidential elections and more than any presidential or general election in other countries, except the Malaysian GE! Not just because the US is a close trading partner or a big investor, but because we have kids, friends, relatives over there and we used to spend some years "the States" ourselves. It's where Hollywood is, land of the free and home of the brave, birthplace of Apple and Macs, CIA, FBI, WMD, DOJ, blah blah blah. The reaction towards Trump's victory ranged from WTF! to I-told-you-so, even my 13-year old had a one-line to add: "Some of my friends are scared shit, Trump's President". I asked her: "What are they scared shit of? She said: "They are just scared shit".

Me, I think it's OK to be wary of the unknown. What scares me are people who think that Trump's victory is a sign from God for Malaysians to act against the evil and the corrupt!

"What a sweeping victory. Trump won the Presidency, the Senate and House of Representatives.  No quarters given and no quarters asked. He was betrayed by party scumbags corrupted by the Obama/Clinton Crime Syndicate. They sabotaged his campaign. Top party leaders did not turned up at the party convention when he won the nomination. Then these criminal scumbags declared they will vote for criminal Killary in the election. He spent his own money. The bulk of his campaign funding. Yet, inspite his flaws and never ran for any public office he trash all his opponents because he at least dare say in the most blunt terms the truth about his country - bankrupt and dying and inspire his people to defeat the scumbags and save America, turn their backs on the criminal war agenda by the Neocons anf to work for peace in Syria and the Middle East with Russia. God indeed work in mysterious ways. I was not right.  God was right and all I did was to pray and have absolute faith in HIM to answer my prayers and millions the world over for global peace.  Not pawns to Soros zionist money and schemes to control the nations that he had targeted under the guise of philantrophy. Allah be praised. God willing Malaysia will be saved from the same scourge of corruption. But we must be vigilant. Trump did not bow to Soros money.  We do not need Soros or any Zionist money to defeat the Najib regime.  All we need is Allah's blessing. Pray."

I hope you are not laughing. Matthias has a faithful, cult-like following online as well as on You Tube. You underestimate him, like you underestimate Trump, at your own peril!

But I guess Dr M's longtime special advisor was not aware that Najib is, supposedly, Trump's golfing buddy and "favourite Prime Minister" ... 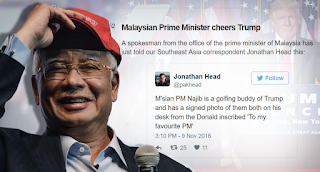 Najib's other detractors will be trying hard not to go down Matthias' way. They have their own ideas. South China Morning Post boldly asks in its post-US election analysis:

If they'd asked me, I would suppose that Trump will deal with the probe as Najib's other "golfing buddy", Obama, deals with the 1MDB probe. Right?

Anyway, I speculate that by this weekend Malaysians will go back to their other worldly concerns. Trump, like Obama back then and Justin Trudeau last year, will pass us by. As Najib says, Trump's victory will not affect our ties with America i.e. our kids, friends and relatives there should be fine and we can still travel to the US for holidays and business as we've always done, the Apple phones will continue to be very expensive even if the Dollar tanked, and it will still not be the land for the Red Indians' braves.

But if Trump's America turns ugly, uglier than it already is, then there's always China. It's not a pretty alternative, but we've always wanted to Look East, anyway.

Matthias Chang is one of the those unhinged "holy" entities, totally hypocritical about anything he touches that will always turn into dark brown sh*t! Matthias sought the help of the "Zionists" t obring down Najib on behalf of the hypocrite old pharaoh master of his, the "Zionist" wouldn't spend a shekel or a gram of energy to help out, and now Matthias is wobbling around pretending asking the "Zionist" shilling and help was what he never begged for!

Being a dumb ass with what would otherwise be an honourable enterprise, Matthias discovered he couldn't have it both ways with the flotilla to Palestine. He rightly worked up the "Zionist" and the "Zionist" naturally fcuked him and still fcuks him and the old pharaoh back - took their money but did a half-hearted job of running down Najib.

When Matthias spend all the money and the old pharaoh dies, the Yahudis would still be squeezing money out of the dumb fools the "Zionist" wants to fcuk back many times over!

If Matthias' "praying" is worth anything, he should team up with that equally-deluded sausage-shaped char kuay teow fryer's daughter, another "holy" "G*d-fearing" showmonkey - pray, and magically Najib would fall, there would be "rapture" and the "kingdom" and the impotent come!

The two should even demonstrate the power of their "praying", pray for amputees and see if they get their limbs back!

Matthias never trusted his "praying" and his "G*d", couldn't last fifteen minutes with all his big show of that threatened "hunger strike", made a huge ass of himself the huge food-crunching machine he is.

This damage-control exercise of revisionism and sucking up to Trump won't work. Not because Trump and Najib are necessarily "buddies", but because any cause Matthias takes up, he only succeed in making himself a bleeding buffoon and further bad news for Catholicism he as a massive coward has to hide behind!

What a huge hypocrite taking the name of the man in white sheets in vain!

Matthias Chang support Trump and he claim to defend palestine:

Are you mocking Najib Bru?


"Me, I think it's OK to be wary of the unknown. What scares me are people who think that Trump's victory is a sign from God for Malaysians to act against the evil and the corrupt!"

Absolutely not, hemsum, I think we should retain the evil and the corrupt.

After all it's only KWAP, Yapeim, TH and other public funds that suffer when the First Klepet go shopping. The more the merrier, I say!

PS...Matthias Chang is a joke of Mat Maslan proportions. Whatever happened to our babyfaced boy from Pontian. Rindu lah.