How Mahathir tried and failed to get China's RM144 billion

Updates:
"The opposition is jealous and worried about Prime Minister Najib Tun Razak’s China visit, which has turned out to be a roaring success." - Mahathir's weapon of distraction, Salleh Said Keruak 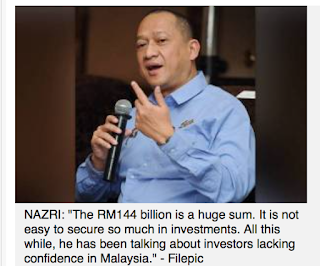 Sunday, 6 Nov: I don't often agree with Nazri Aziz but the point he underscored in Jealousy prompted Dr M's comments (Malaysian Digest, 3 Nov) made me look back at Mahathir Mohamad's own politics re China when he was PM.

A lot of people forget that Dr M tried very hard to be in China's good books. Through his ambitious but ill-fated East Asia Economic Group (EAEG) proposal, he tried to get China to lead Asia, together with Japan and South Korea, against America and Europe. EAEG was renamed a Caucus after consultations with spooked and reluctant Asean partners (and Japan and South Korea) but it remained a proposal until the end, much to Mahathir's chagrin.
Imagine if he had succeeded! It would have been Mahathir announcing last week's historic RM144 billion Chinese investment into Malaysia, not Najib!

In any case, China (not the US or Japan) has been Malaysia's largest trading partner since 2009, the year Najib became PM. Quite naturally, the biggest trading partner would start bringing in huge direct investment into Malaysia, just as the US and Japan had done before, and become this country's leading investor.

But that's something not only Mahathir finds difficult to accept, whether out of jealousy or his own past failure to put China in his pocket. 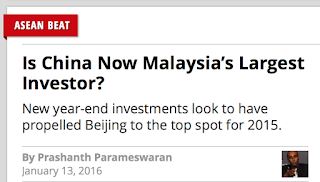 "That said, even if official data eventually does show China as being Malaysia’s largest foreign investor, that could just be a 2015 aberration instead of a sustained trend, given the uniqueness of these year-end investments. As The Post notes, it will be difficult for Beijing to sustain the top position since Malaysia’s plan to become a high-income nation by 2020 prioritizes high-value industries, with such investments typically coming from traditional sources like Europe, Japan, Singapore, and the United States."

A lot of people having to eat their own words. I think that's why they hate Najib.

READ ALSO:
By Helen Ang, DAP got nothing to say about Beijing's embrace of Najib Razak?
Annie, Shouldn't reject an offer of friendship
The Brick, China trip ... marks the dissolution of Mahathirism
Kadir Jasin, Show us genuine China money