NOT a Budget for "monkeys"

But a big, tacit NOD for KJ
Kuala Lumpur, 24 Oct: 16 YEARS at the Business Times, I think I've covered my fair share of the Federal government's annual Budget sessions in Parliament.
One chore was to try and "label" each Budget in order to simplify or capture its essence for the busy readers.
The most overused till this day has to be "the people's Budget" (and its variations "a budget for all/everyone/rakyat etc).
At the height of his power (over the media bosses, at least), Anwar Ibrahim described his own Budget "a caring Budget".
At the height of his, Dr Mahathir Mohamad officially changed Belanjawan, the old Bahasa Malaysia word for Budget, to Bajet.

I think Ibrahim Ali was spot on to call Najib Razak's 2017 Budget tabled last Friday Bajet roti dan keju (bread and butter Budget). There's quite a lot for civil servants and those in the bottom 40 per cent of the salary scale. What I don't understand is why the Perkasa chief was so unhappy with the fact that Najib is trying to ensure that the people's welfare is made a priority in these trying times. As former banker and Cabinet Minister Abdul Wahid Omar pointed out, this has got to be one of the most challenging Budgets that Najib has had to prepare, given the limited financial resources and the sluggish world economy.

My circle of friends wanted me to thank the PM specifically for: 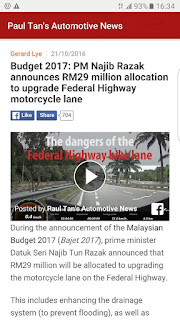 The bikers have complained about the bike lanes for years and many had actually given up hope that something would actually be done. I hope the relevant authorities have bicyclists in mind, too, when upgrading those lanes. A lot more cyclists are using those narrow lanes these days ...

The gadget-laden kids, meanwhile, are grateful about this:

There are actually a lot of little things for the small people in the Budet. That's why Wahid calls it "a people-centric responsible Budget", I suppose.
But the "monkeys" won't know it, said social media journalist Ahmad Cendana  on his Facebook, in reference to Opposition politicians who had staged a walkout during Najib's Budget speech.

“Monkeys – that’s a harsh word to use, but it is well justified in this case. Come to think of it their actions are a good thing. They have inadvertently exposed themselves to their supporters as to what they really are. A bunch of uncouth empty barrels without much substance. So these are the people who are being promoted to replace the present government?” - Malaysians still disgusted over MPs' budget storm out  The Mole 23 Oct

Khairy Jamaluddin, the Youth and Sports Minister, has a billion reasons to be happy.

The RM1.2 billion allocation made by the PM in his 2017 Bajet is the biggest yet for sports. All those years covering the Budget, we business journalists were never really interested in how much was going to be spent on sports. That's probably because we are were a nation of losers when it comes to sports. Not anymore In the past year alone, we have produced Paralympic gold medallists and Olympic silver and bronze medallists. Latest, we are now world dodgeball champions!
But more money for sports aside, it is the tacit approval that PM Najib has given the Minister, who is also the Umno/BN Youth chief, that's caught my eye. Wasn't that long ago when KJ was deemed "not yet ready" whereas Mukhriz Mahathir, who had just lost to KJ in the contest for the Umno Youth leadership, was made a Deputy Minister, many said in deference to his dad!
Today, like it or not, you have to admit that KJ has done an excellent job, indeed. You don't have to like his politics but if he continues to perform and his Boss continues to have faith in him, it could only mean that he is poised for bigger things in the government and the party.
There are vacancies for Umno vice presidency that need to be filled, urgently!


p.s. In the Budget, the Prime Minister has also given KJ the responsibility of spearheading the TN50, the new 30-year vision for Malaysia that will replace Mahathir's Vision 2020.