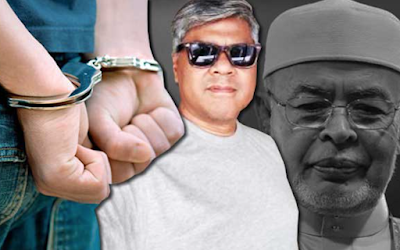 KL, Tues 20/9/16: The media described Sidek Kamiso as "former journalist" but the great Pak Samad told me that once a journalist, always a journalist. Even more true these days when we don't think twice about calling accountants, rapists, and human rights activists "citizen journalists". You wouldn't call someone a "former citizen journalist", would you? Not that I think Sidek should be given special treatment because he's an ex-journalist of The Star. If he had committed a serious crime, go after him like you'd go after Batang Kali. But Sidek's only "sin" were his tweets about the passing of Tok Guru Haron Din that some found disrespectful of the revered man. Hardly something that called for his arrest at his home at 4.30 in the morning, or bundling him away for questioning 300km away in Johor Baru! [Ex-journo arrested, accused of insulting Islam  -FMT 19/9/1]

They took Pak Samad away from his home during the wee hours, too, and then incarcerated him for 5 years under the Internal Security Act. But that was 40 long years ago. Don't take us back to those dark ages, IGP.