The smoking out of Vape: The work of cigarette lobby or something more evil?

Puchong, 22/9/16: The night we celebrated the Mole's 5th birthday, many of our guests adjourned outside the restaurant to enjoy their after-dinner smoke. How was it, I was wondering, that despite the government's aggressive anti-smoking campaigns, a lot of people still smoked? And there seemed to be a lot of new/young smokers, too? What happened to vape?

I asked Ucin, "I thought you were vaping to quit smoking?"

"Lecehlah (too much hassle), boss" he lamented (for the record, I'm not his boss,) "they have made it so difficult for people to vape. All sorts of rules. So hard to get supply. That royal decree, some more ....".

Yes, they have, haven' they? The Malay Mail's cover story yesterday Multi-million ringgit vaping industry smoked out confirmed it: vaping in Malaysia has been smoked out!

Was it the work of the powerful cigarette lobby, or was the Government behind it? 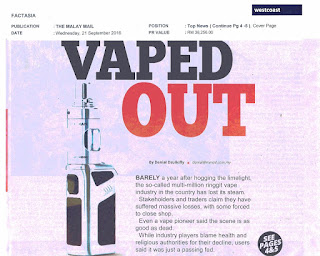 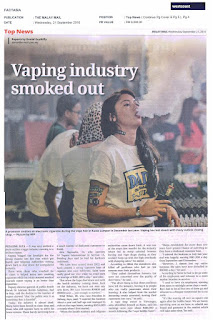 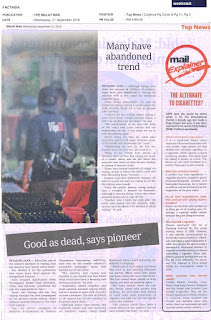 No, not the cigarette lobby, someone close to the vape/cigarette industry told me. "You can blame it on confusion. Businessmen stopped investing in the vape business. They dare not invest because they are not certain of what the Government was going to do."

"And people have been scared away from vaping." Many (like Ucin) have gone back to smoking.

Which is a pity, really. It has been scientifically proven, over and over again, that vape is one of the most effective aids for people who want to quit smoking. Can't beat will power but not everyone has that much will power to stop smoking cold turkey. As an ex-smoker myself, I know how so extremely hard it is to quit. There was no vape when I was trying to kick the habit back in 2002. What worked for me was resorting to the occasional cigars to overcome the craving. But those Cubans are an expensive way to quit!