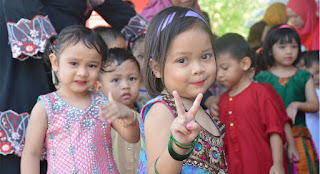 TTDI, Fri: In 2008, the blogger Annie was desperately seeking funds to set up a centre for special needs children in Kuantan. The parent of a special child, Annie approached an aide of Najib Razak, who promised to let Najib know about the request for funds ASAP.

"He understood why I had to settle the matter before I leave Pahang.
My friend came back to see me a week later.
Najib had approved an allocation for the fund from a special budget in his capacity as deputy prime minister."

Annie, one of the few bloggers who have so far refrained from taking sides in the Najib-Mahathir quarrel, is making a stand when it comes to Permata, the brainchild of Rosmah Mansor, the PM's wife.

"... I think we need to be fair.
Whacking Permata which is meant to assist children, including those with special needs, is not fair.
I believe that those who are going after Najib, should not make Permata their target. It's being mean to do that, okay."

Permata, a special program for Malaysian children under 4 years old, was turned into a punching bag by the anti-Najib crowd after an award meant for Rosmah for her work at Permata was "deferred" following pressure from at least two international media organisations known for their crusade against the Malaysian Prime Minister.

cute kids at the top, link at bottom to pathetic excuse for The Chubby One getting booted out of the UNESCO award.....

My emotions are swayed!!!!

I love you Rosie, almost as much as you love public funds1

Oh, before your inevitable update referring to the Bokova statement:

"Very soon before the end of this year the UN Security Council will put to UN Secretary General Ban Ki Moon the name of his successor. Among the candidates is the current director general of UNESCO, Irina Bokova of Bulgaria.
The Presidency of the UNSC during this relevant time, from August until 31 December 2016, is being held by Malaysia, whose "First Lady" Rosmah Mansor has just been named a recipient of UNESCO's Lead by Example Award, despite her highly visible and well publicised part in the billion dollar 1MDB money laundering scandal, which the FBI and US Department of Justice have described as the biggest ever case of money laundering they have ever investigated."

Dato Rocks would be proud of you.